SINGAPORE - Indonesian e-commerce firm Bukalapak started offering its services here on Monday (May 20) as it sets out on an ambitious regional expansion strategy.

Bukalapak, a tech start-up whose valuation of more than US$1 billion makes it a rare unicorn company in Indonesia, is the country's first e-commerce site to be available internationally.

Products sold on the site include health and beauty items, pantry lines and handicrafts.

Bukalapak co-founder and president Fajrin Rasyid said BukaGlobal was designed to address logistical challenges in the region, such as high postage and courier delivery costs.

He told a launch ceremony at the Indonesian Embassy in Singapore: "We want to break down barriers that hinder young and small entrepreneurs from competing on a global playing field, primarily on access, infrastructure and connectivity."

Mr Fajrin said later that his company chose Singapore and the other four markets to launch BukaGlobal as they matched two criteria: "There are many Indonesians there and the people in these countries understand Indonesian culture." 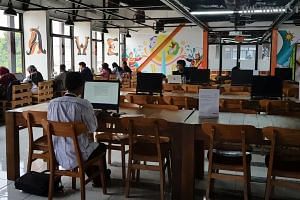 BukaGlobal has tied up with Janio, a Singaporean e-commerce logistics start-up that began operations last year, to handle shipping.

Mr Ngurah Swajaya, Indonesia's ambassador to Singapore, noted: "The strong ties that have been established between Indonesia and Singapore make it the suitable market hub to introduce Indonesian products in the regional market. This could be a proper strategy to advance the SMEs' potential."

Indonesia's Minister of Communication and Information Technology, Rudiantara, said BukaGlobal was aligned with his government's vision to capture the growth of the expanding middle class in the country, where the government is helping eight million SMEs transform their business model.

Mrs Putri Wanna, one of several Indonesian vendors at the event, said she hoped to find new customers in Singapore and Malaysia for her coffee and coffee-related products from her hometown of Aceh that she sells under the brands Indo Dealz and Kopi Jumpalitan.

Mrs Wanna added: "Hopefully, with BukaGlobal we SMEs have more opportunity to scale up our business."