SINGAPORE - Companies and society will benefit from increasing participation by women in the economy and leadership positions, said President Halimah Yacob on Wednesday (Sept 18).

Madam Halimah told the Women's Forum Asia: "Our society has been built on principles of meritocracy and equal opportunity for all.

"To this extent, organisations in Singapore must continue to embrace diversity in leadership positions, which has been shown to lead to positive impact on business profitability, a more robust corporate governance, as well as fresh and innovative perspectives."

Madam Halimah noted that female representation on the boards of the top 100 primary-listed companies here has doubled in four years.

She also noted the potential for greater women's participation in entrepreneurship and science and technology, adding that the common misconception that women do not do well in these fields needs to be addressed.

Madam Halimah cited a study conducted with more than 1,000 Asian firms by the International Finance Corporation, a member of the World Bank Group.

It found that companies where at least 30 per cent of the directors were females fared better than firms with all-male boards.

This presents a strong business case for increasing women's participation in both workplaces and on boards, Madam Halimah said. 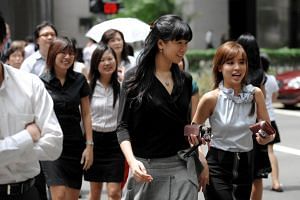 Bursa Malaysia chairman Shireen Muhiudeen said during the opening discussion that new technology means more women could participate in the workforce, especially as it enables them to work from home.

"If you can do something via technology, why not... this would be one of the ways to keep women working and empowered, and part of the ecosystem," she said.

Speakers at the forum, which is focusing on the importance of female leadership in a changing world, include Ms Agnes Pannier-Runacher, French State Secretary for Economy and Finance, Schneider Electric chairman and chief executive Jean-Pascal Tricoire and former PepsiCo CEO Indra Nooyi.

Around 120 speakers and 1,500 people are expected at the three-day forum, which ends on Friday.

The Straits Times is a media partner of the event being held at Raffles City Convention Centre.