SINGAPORE - An industry association that will oversee digital tokens like bitcoin and devise efficient ways to regulate the sector officially started on Thursday (Nov 29).

The Token Economy Association (Tea) is already working with the Association of Crypto-Currency Enterprises and Start-ups Singapore to launch a code that spells out best practices in a range of areas.

These include anti-money laundering, ways to stop terrorism financing and due diligence procedures so customer identities can be authenticated.

Tea chairman Chia Hock Lai said the body, which has 11 members and began work in August, can help the digital token industry establish a global standard of conduct that places compliance first in the absence of a clear regulatory framework.

"Thoughtful self-regulation can play an important role in the stable future development of this growing industry," added Mr Chia.

The code will have input from regulators, banks and other relevant stakeholders and "adequately address" risks, according to the two organisations. It is expected to be released by March.

Tea's launch comes as the Monetary Authority of Singapore (MAS) calls for ways to monitor the emerging digital token sector. 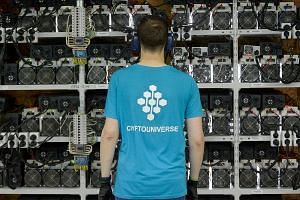 The trouble with cryptocurrency's viral growth

US regulators act against cryptocurrency firms

Bitcoin is the new gold for the cryptocurrency age

It noted last Friday that financial institutions here are showing a growing interest in digital token markets but the ecosystem, which includes trading platforms, brokers and wallet providers, may fall outside regulators' ambits.

The MAS said it has noticed "early signs of increased integration between financial institutions and digital token markets".

It added that initial coin offerings and the evolving blockchain technology, which drives advancements in digital tokens, could raise investor interest.

These factors are behind MAS moves to strengthen its surveillance of digital token markets but hurdles have appeared.

"Monitoring developments (on digital tokens) has proven to be a challenge as data on digital token markets is not readily available from conventional channels," said the MAS, which used data from trading platforms for its review.

Its analysis suggests that the world's most popular digital token - bitcoin - is having a small impact here. Monthly trading volumes between bitcoin and the Singapore dollar are less than 1 per cent of those on the Singapore Exchange. Investor interest has also dipped substantially since January this year, the MAS added.

Data from financial institutions regulated by the central bank also showed that their exposure to digital token markets "are currently minimal".

Total market capitalisation of digital tokens globally rose to a peak of about US$800 billion in January 2018, but it fell to under US$300 billion as of October.

The reasons for the fall include security issues on major trading platforms and regulators keeping a tighter watch, the MAS said.

Tea's Mr Chia, who is also the president of the Singapore FinTech Association, said industry associations "add a layer of oversight... as it is important for consumer protection and to ensure the integrity of the (digital token) markets".