SHANGHAI (REUTERS) - China’s yuan fell past the psychologically important 6.9 per US dollar level to its weakest in nearly five months on Friday (May 17), but losses were capped on signs the central bank will defend the currency from weakening past the critical 7 per dollar mark.

The Chinese currency is set for a fifth straight weekly loss and has already shed around 2.5 per cent to the dollar since US President Donald Trump said on May 5 he was going to raise tariffs on US$200 billion of Chinese imports.

But in both onshore and offshore trade it recouped some of the losses in afternoon deals, after sources told Reuters that China’s central bank will use foreign exchange intervention and monetary policy tools to ensure the yuan does not weaken past the 7 per dollar key level in the immediate term.

“Breaking 7 is beneficial to China because it can reduce some of the effects of tariff increases, but the impact on our renminbi confidence is negative and funds will flow out,” one of the sources said.

Market sentiment has been hurt by US government moves to block China’s Huawei Technologies from buying vital American technology, throwing into question prospects for sales at some of the largest tech companies and drawing a sharp rebuke from Beijing.

Traders and analysts said many corporate clients had set the strike price for their option contracts at around 6.9 per dollar, meaning a breach of that level could quickly send the Chinese currency to 7.

The yuan has lost all its gains made this year. Markets are now debating whether the authorities will let the renminbi breach the 7 per dollar level, which was last seen during the global financial crisis.

If the yuan finishes late night trade at the midday level, it would have lost 1.2 per cent to the dollar for the week, the biggest weekly loss since July 2018.

But losses in the onshore yuan were also capped as several traders said investors were unwilling to test fresh lows below 6.9 per dollar - a level the market widely believes the authorities will guard to prevent it from sinking further. 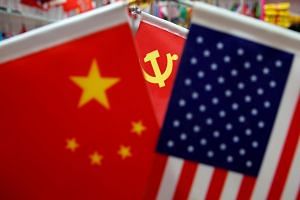 China has a $5 trillion war chest to counter US tariffs

Chinese stocks most exposed to escalation in US tariffs

China not interested in trade talks with US for now: State media

“The market does not dare to buy a lot of dollars, as investors are worried that the central bank could step in any time soon,” said a trader at a Chinese bank.

Philip Wee, FX strategist at DBS, said the yuan was likely to be capped at 7 per dollar ahead of a possible meeting between President Trump and his Chinese counterpart Xi Jinping at the Group of 20 summit in late June.

“Assuming the Xi-Trump meeting takes place next month, no one expects a trade deal, if any, to roll back existing tariffs but to hold off Trump’s threat to hit a 25 per cent tariff on the remaining US$325 billion of Chinese goods,” he said in a note on Friday.

The offshore yuan weakened to 6.9420 in morning trade, erasing all the gains made since the previous Trump-Xi meeting in November. It traded at 6.9340 per dollar as of 0656 GMT.