SYDNEY (REUTERS, WASHINGTON POST) - Yields on benchmark US 10-year treasury notes fell further below three-month rates in Asia on Monday (March 25), an inversion that has in the past signalled the risk of economic recession in the United States.

The yield on the 10-year Treasury is closely watched in the financial world because many view it as a window on where the economy is headed: up, down or sideways. Yields work inversely to a bond's price.

When the 10-year yield is lower than the three-year yield, it tends to signal that people are locking up money longer term because they fear a slowdown in business profits and its accompanying decline in stock prices.

Last Wednesday, the Fed downgraded its forecast for the US economy, adding that it plans to end its programme of reducing the bonds and mortgage-backed securities it holds on its balance sheet. Investors viewed the central bank's release and comments from chair Jerome Powell as more dovish than expected.

"The yield curve inversion, coming quickly after a dramatic 'about face' for the Fed, is undermining investor confidence," said Ms Kristina Hooper, global strategist at Invesco. "At the end of the day, we have to remember that an inverted yield curve doesn't cause a recession, it's just a good indicator that one is coming. Investors should not be panicking." 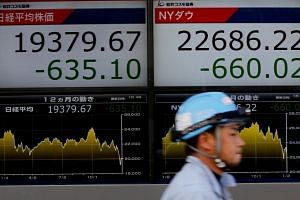 Fewer new jobs in US as labour market tightens

The American economy is still remarkably healthy. US stock indexes are near all-time highs, unemployment is near a record low, real wages are increasing, interest rates are fuelling the economy with cheap money and oil is inexpensive.

But weak manufacturing data out of Germany last Friday showed a third consecutive month of dwindling activity, feeding into investor fears of a worldwide recession. Germany has been the eurozone's growth engine.

"This morning we got new statistics on a slowing economy, from both US and German, adding to the market concern," said Mr Howard Silverblatt of S&P Dow Jones indices.

This warning signal has a fairly accurate track record. A rule of thumb is that when the 10-month Treasury yield falls below the three-month yield, a recession may hit in about a year. Such an inversion has preceded each of the last seven recessions, according to the Federal Reserve Bank of Cleveland.

The last time a three-month Treasury yielded less than a 10-year Treasury was in late 2006 and early 2007, before the Great Recession made landfall in December 2007.

WHY DID THE YIELD CURVE INVERT?

Longer-term Treasury yields have been falling this year, in part on worries that economic growth is slowing around the world. When investors become nervous, they often abandon stocks and other risky assets and flock to Treasuries, which are among the world's safest investments. High demand for bonds will, in turn, send yields falling. Accordingly, the yield on the 10-year Treasury has sunk to 2.43 per cent from more than 3.20 per cent late last year.

Shorter-term rates, by contrast, are influenced less by investors and more by the Fed, which raised its benchmark short-term rate seven times over the past two years. Those rate hikes had been forcing up the three-month yield, to 2.45 per cent from 1.71 per cent a year ago. This momentum will likely slow now that the Fed foresees no rate hikes in 2019. But if longer-term Treasury yields continue to weaken, the curve could remain inverted.

IS IT A PERFECT PREDICTOR?

No, an inverted yield curve has sent false positives before. The yield curve inverted in late 1966, for example, and a recession didn't hit until the end of 1969.

HAVEN'T WE HEARD THIS BEFORE? 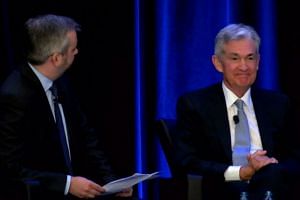 Fed can be patient as US economy evolves in 2019, says chairman Jerome Powell

SO IS A US RECESSION COMING OR NOT?

It's too soon to say. Economic growth is slowing around the world, but the US job market remains relatively strong.

"This is a signal that we should take seriously," said Ms Frances Donald, head of macroeconomic strategy at Manulife Asset Management. "However, it's too early to tell whether this is indeed a harbinger of a recession or a blip. For me to feel confident to say this is a predictor of recession, I would need to see it persist for at least one to two months."

Potentially more concerning, Ms Donald said, is how businesses and consumers react to the inverted yield curve. If they were to cut back on hiring or spending, that could trigger a self-fulfilling prophecy that leads to a recession.

"We're so accustomed to this telling us a recession is ahead that my concern is businesses and households get so scared they effectively create one," she said.