SINGAPORE - Manufacturing - now the brightest spot in the Singapore economy - turned in yet another outstanding performance last month, thanks largely to electronics makers.

This allayed some concerns that factories, which have been a key growth driver this year, might be losing steam.

Even if manufacturing continues powering ahead, however, the fact remains that there is still the rest of the economy to worry about.

Manufacturing surged 13.1 per cent in June, way ahead of the 8.5 per cent forecast by economists and also the fastest pace so far this year.

This came amid fears that the sector might be hard-pressed to sustain the strong growth it enjoyed earlier in the year, which was driven in large part by surging global demand for semiconductors and related equipment.

June's strong showing means Singapore's second-quarter economic growth number will likely get an upgrade from an earlier estimate of 2.5 per cent, economists say.

But it is still unclear how much of this boost is being felt outside electronics manufacturing. and trade-related services segments. 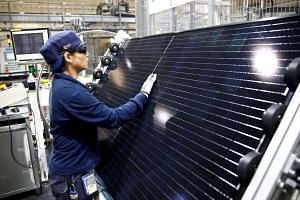 UOB economist Francis Tan noted that growth remains uneven even within the manufacturing sector and the turnaround has been "overly reliant on the cyclical increase in the demand for semiconductors and its surrounding services, such as precision engineering".

The marine and offshore engineering segment, for instance, remained weak in June, with output shrinking 11.8 per cent over the same month a year ago as low oil prices continued to bite.

Economists have also previously warned that the lacklustre labour market is likely to continue weighing on consumer spending, which means industries which depend on local demand are unlikely to experience a significant lift in the coming months.

Clusters like retail and food and beverage continue to face headwinds - besides slower demand, retailers are also contending with longer-term challenges like the rise of e-commerce.

Advance estimates of second-quarter growth also showed that the construction sector is struggling. It shrank 5.6 per cent in the second quarter, extending a 6.1 per cent contraction in the preceding three months.

In an increasingly competitive, uncertain environment, it is becoming tougher for all sectors to be doing well at the same time.

It seems uneven growth might become the new normal in the Singapore economy.