SINGAPORE (AFP) - Hong Kong's reputation as a stable financial hub has been shaken by a controversial extradition Bill that prompted massive protests, and its loss might just be Singapore's gain, experts say.

The Chinese territory and the South-east Asian city-state have long vied for the title of Asia's top financial destination, attracting international business from around the world.

But a decision by Hong Kong's Beijing-backed government to introduce a Bill allowing extradition to the mainland sparked concern among the business community and brought reportedly up to two million protesters onto the streets.

Hong Kong's political crisis is "definitely a dent in its reputation", said Mr Lawrence Loh, director of the Centre for Governance, Institutions and Organisations at the National University of Singapore's Business School.

"There will be some immediate benefits (for Singapore)," he added, pointing to reports that tycoons were already shifting money from Hong Kong.

Hong Kong offers access to China and enjoys freedoms unseen in the mainland, under the terms of its 1997 handover from Britain to Beijing.

It has a large expatriate community and prides itself on its reputation as a financial capital in the region.

But its status is temporary - the handover agreement expires in 2047 - and in recent years, there has been increasing concern about Beijing's influence. 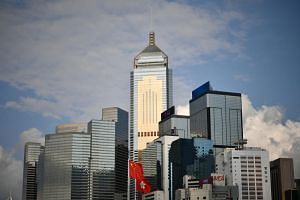 Growing uncertainty begins to take its toll on Hong Kong

Companies were unsettled not only by the massive demonstrations, but also by the proposed law, which they feared could undermine Hong Kong's reputation as a safe place to do business.

Opponents of the proposal worry it will entangle people in China's notoriously opaque and politicised justice system, and threaten those critical of Beijing's policies.

'SOVEREIGNTY ON ITS SIDE'

The territory's Chief Executive Carrie Lam has now suspended the Bill, but she has declined so far to fully withdraw it from consideration.

And that uncertainty could mean firms looking for a first-time base in the region will lean away from Hong Kong and towards Singapore, said Mr David Webb, a Hong Kong-based investor who advocates for stronger corporate governance.

"If you are considering doing it (opening an office) for the first time... then you would probably look at the potential for these laws to be resurrected," he told AFP.

Singapore has sought to promote itself as a less crowded, more orderly alternative to Hong Kong, though it is sometimes mocked as dull and criticised for its restrictions on civil liberties.

"Singapore is not known as a bastion of free speech but it does have sovereignty on its side," Mr Webb said.

The city-state has also built a reputation for a strong rule of law - key in attracting businesses - and a growing number of foreign companies come to Singapore to settle commercial disputes.

The Singapore International Arbitration Centre, one of several similar centres around the world, received over 400 cases last year and has seen its case-load increase fourfold over the past decade.

In Hong Kong by contrast, critics say the extradition Bill is the latest sign that a traditionally sound legal system is being eroded as Beijing seeks to assert greater control.

Still, any shift away from Hong Kong is likely to be more of a trickle than a flood, experts said.

Mr Loh added: "I do not believe that the uncertainty and loss of confidence has reached a tipping point where you will see the floodgates open."