SINGAPORE: Singapore's non-oil domestic exports (NODX) surged ahead of economist forecasts to log 20.9 per cent expansion in October over the same month a year earlier.

While this was a turnaround from September's 1.1 per cent slide, it was due in part to a low base last October. Economists said that the data signalled a robust start to the fourth quarter, but noted that electronic shipments are showing signs of slowing.

These are some comments from economists on the latest export numbers.

ING: In yet another strong turnout, the non-oil domestic exports surged 20.9 per cent in October, a big upside surprise compared with consensus of 11.9 per cent. The month-on-month bounce more than clawed back the 11 per cent crash in the previous month. Electronics and pharmaceuticals were the sources of NODX collapse in September. And they were the source of bounce in October.

We saw from October exports data from (South) Korea and Taiwan signs of electronics-led exports recovery tapering out in the final quarter of the year. Singapore data doesn't support this view, nor does it defy it. With the seasonal product replacement cycle for flagship mobile devices coming to an end, the NODX growth is likely to ease in the months ahead. Nonetheless, today's data signals a good start to the fourth quarter of the year.

Nomura: Non-oil domestic exports (NODX) growth rebounded (in October). That said, average NODX growth of 9.5 per cent over September and October combined shows a sharp slowdown from 16.7 per cent in August. 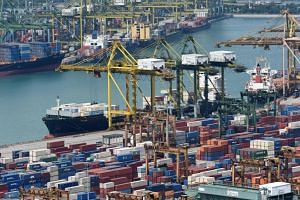 Overall, we continue to see slight upside risks to our full-year 2017 GDP (gross domestic product) growth forecast of 2.8 per cent, which is similar to the Monetary Authority of Singapore's (MAS) expectations for full-year growth being in the upper half of the official 2-3 per cent forecast range. Nonetheless, this will likely continue to be led by semiconductor-related sectors which should have limited spillover effects on the rest of the economy.