SINGAPORE - Singapore's economy grew a slightly lower-than-expected 2.5 per cent in the first quarter of 2017 from a year earlier, easing from the 2.9 per cent growth in the previous quarter, according to advance estimates released by the Ministry of Trade and Industry (MTI) on Thursday (April 13).

Economists polled by Bloomberg had tipped that gross domestic product (GDP) would expand by 2.6 per cent on a year-on-year basis.

While growth is slower than the 2.9 per cent expansion seen in the fourth quarter of 2016, the pace is still at the higher end of the Government's full-year forecast of 1-3 per cent for this year, and the 2016 full-year growth rate of 2.0 per cent.

Compared to the previous quarter, GDP shrank 1.9 per cent, a bit more than the 1.8 per cent median forecast of Bloomberg analysts. Economists say the likely contraction is due to the economy coming off a high peak in the fourth quarter, when GDP rebounded strongly by 12.3 per cent on-quarter, rather than signalling any sharp deterioration in economic activity.

The manufacturing sector expanded by 6.6 per cent year on year in the first quarter, moderating from the 11.5 per cent growth in the previous quarter. 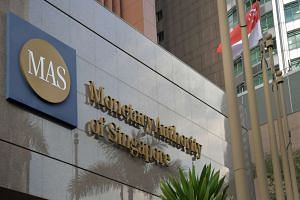 On a quarter on quarter, manuafacturing contracted by 6.6 per cent in the first quarter following the 39.8 per cent surge in the fourth quarter of 2016.

The services sector expanded by 1.5 per cent year on year, an improvement from the 1.0 per cent growth in the previous quarter. Growth was mainly supported by the wholesale & retail trade and transportation & storage sectors, which were in turn bolstered by a continued recovery in exports, said MTI. On a quarter-on-quarter basis, the services sector contracted by 2.2 per cent, reversing the 8.4 per cent expansion in the preceding quarter.

Private economists have raised their forecast for economic growth for 2017 to 2.3 per cent, according to the last quarterly survey by the Monetary Authority of Singapore in March. This is a sharp hike from from the 1.5 per cent growth projection in the previous survey published in December.

MTI will release the final GDP estimates for the first quarter, including performance by sectors, sources of growth, inflation, employment and productivity, in its Economic Survey of Singapore in May.