SINGAPORE - Singapore's financial sector grew 7.7 per cent last year, as assets under management rose to a record high, the Monetary Authority of Singapore said on Tuesday when announcing its latest annual report.

AUM rose 30 per cent from $1.8 trillion in 2013 to over $2.3 trillion in 2014, while foreign exchange trading jumped 40 per cent year-on-year to US$480 billion in October 2014, MAS managing director Ravi Menon said, adding that Singapore already commanded 60 per cent of infrastructure financing transactions in Asean. 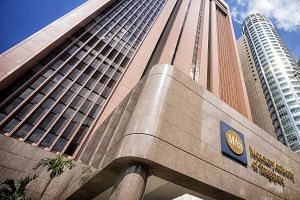 Investors can apply for the first Singapore Savings Bonds from Sept 1: MAS 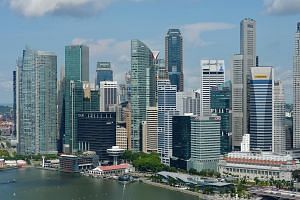 Singapore's growth forecast for 2015 under review but economy unlikely to weaken further in second half-year: MAS

More sovereign wealth and pension funds also set up offices in Singapore to access the investment opportunities in the region, it added.

Overall sector growth in 2014 was higher than the 2.9 per cent economic growth, while averaging 8.2 per cent growth between 2011 and 2014. But tangible job growth in the financial services sector will take time to materialise as training and up-skilling efforts continue, said MAS.

MAS recorded a small profit of $0.3 billion in its last financial year. This was much lower than the S$15.8 billion recorded in the previous year, Mr Menon said, but the volatility was due mostly to currency swings.

Stripping out the currency impact, foreign investment gains were $10.4 billion, comparable to $10.6 billion in the previous year.