SINGAPORE - A group of Singapore companies will soon start offering professional services such as financing, listing and legal advisory to Shandong companies seeking to internationalise.

The new platform by Enterprise Singapore and the Qingdao Bureau of Commerce is expected to be launched by the first half of next year, with interested companies such as OCBC, UOB, Rajah and Tann and the Singapore Exchange, said Senior Minister of State for Trade and Industry Chee Hong Tat on Thursday (Oct 31).

This is among the ways Singapore and China's Shandong province can collaborate further on connectivity and trade, modern services, sustainable development, and people-to-people exchanges, he said.

Mr Chee and Shandong Vice-Governor Ren Airong listed these priorities for the two markets at the 21st meeting of the Singapore-Shandong Business Council, which they co-chair.

Mr Chee said Singapore has worked closely with Shandong in economic development over the past 26 years, and such collaborations with key Chinese provinces underpin the Republic's strong bilateral relationship with China.

In the first half of this year, bilateral trade between Singapore and Shandong grew 3.9 per cent over the same period last year to reach 7.28 billion yuan (S$1.40 billion), according to the Shandong Department of Commerce.

Singapore's cumulative investment in Shandong has also reached nearly 80 billion yuan with more than 1,500 projects as of the first half of this year. 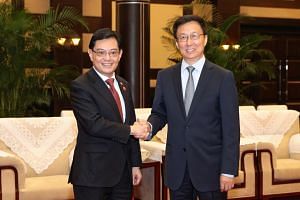 "Against the current global economic environment, we need, now more than ever, to reaffirm our commitment to global trade and demonstrate how like-minded partners can work together to achieve win-win outcomes," said Mr Chee at the meeting at Shangri-La Hotel Singapore.

Ms Ren also said that with Shandong's pilot free trade zone announced in August, which is focusing on areas such as information technology, healthcare, modern services and marine chemicals, there will be more room for cooperation with Singapore.

"We hope to work together to expand into third party foreign markets and optimise resources," she said, addressing more than 180 government and business representatives from both sides at the meeting .

The first area of collaboration that the council is working on is strengthening connectivity and trade between Shandong and Singapore, and between the region of North China and South-east Asia.

Singapore traders and distributors can explore Shandong as a source market for higher value produce, such as hawthorn berry and winter jujube, which local company Siji Trading is looking at exporting into other markets, he said.

Singapore companies with logistics and warehousing capabilities can also work together to support trade flows.

Logistics companies such as YCH Group, Mapletree Logistics, Jurong Port and GSH are already in Shandong.

Mr Chee said the second area of collaboration in modern services will support companies from both sides to expand into each other's markets.

Singapore can also serve as an innovation hub and gateway for Shandong companies interested in investing in South-east Asia.

For sustainable development, many Singapore companies have experience and expertise to offer in transforming traditional industries such as oil and gas, Mr Chee added.

Shandong consumer electronics company Haier, which set up a Singapore Innovation Centre last year, will also be calling for innovations in areas such as sustainable new materials, resource efficiency and food freshness at the Singapore Week of Innovation and Technology in November.

DPM Heng on the trade war, China ties and Singapore's next general election

The two universities also signed an agreement on Thursday with Shanda Dareway Software and Jinan Zhangqiu District Government to develop healthcare technologies and facilitate talent exchanges, among other things.

This was one of 12 agreements signed at the council meeting, witnessed by Mr Chee and Ms Ren.

NTU will also work with Shandong Commercial Group on an executive training programme in areas such as smart city, retail and tourism, and with Shandong Sport University and Peony Group on nurturing e-sports players and developing the e-sports value chain and ecosystem.

Enterprise Singapore will work with the Qingdao Municipal People's Government to encourage more of their enterprises to do business in both markets.

For a start, the Qingdao Festival is being held in Singapore on Thursday and Friday at Clifford Square to showcase products and technology by about 15 Qingdao companies.

In manufacturing, Tyrone Enterprise and Qingdao Beverage Group will jointly invest in a facility that aims to grow the presence of Laoshan mineral water in South-east Asia, while ChemOne Holdings and Huatai Group will collaborate on building a world-scale purified terephthalic acid (PTA) plant to supply PTA to regional polyester producers.

Among the other agreements signed is the one where ST Electronics will work with Qingdao Weidong Education Cloud on a high-tech system, including artificial intelligence, to improve efficiency for transportation in the oil and gas, and electricity industries.