SINGAPORE (BLOOMBERG) - More than four months of unrest in Hong Kong is proving to be a blessing for Singapore, a long-time rival to the title of Asia's pre-eminent financial centre.

Hotel occupancy rates are at an all-time high, one of the most visible signs that Singapore is gaining as unrest deters visitors to Hong Kong. There's also been a pick up in luxury home sales, gold storage and foreign currency deposits - all of which could increase substantially depending on how long the protests drag on.

While the estimated US$4 billion (S$5.45 billion) that moved over to Singapore from April to August is "very miniscule" compared with Hong Kong's US$1.7 trillion in total deposits, the "trend will likely continue as the situation worsens in Hong Kong," said Ju Ye Lee, a Singapore-based economist with Maybank Kim Eng Securities.

The extra cash is welcome news for Singapore, whose economy is slowly slipping toward a recession as speculation grows that Prime Minister Lee Hsien Loong will announce an election well before one is due in April 2021. This month he said Singapore would be "lucky" to see positive economic growth in 2019 as exports continue to slump.

"Whenever there is political instability in the region, money always flows into Singapore," said Bilveer Singh, an associate professor at the National University of Singapore who wrote a book on the country's politics. "Politically, it makes the government look very good, like they are the ones creating political stability for the world, that they are the good guys. Even if it will have a minimal impact on the economy the government will say it has done well."

So far, the government has downplayed any gains. Indranee Rajah, a minister in the Prime Minister's Office, said she hasn't seen any "significant shifts yet" in terms of economic benefits.

"We feel very much for Hong Kong," Ms Indranee said in an interview. "We hope they will be able to resolve their situation."

Some capital has moved to Singapore, although there hasn't been a flood of inflows from the former British colony, according to Singapore's central bank. The city state's banks have seen an uptick in those inquiring about how to re-allocate assets, which is reasonable to expect, Ravi Menon, managing director of the Monetary Authority of Singapore, said in an interview on Tuesday.

It may be only a matter of time before more business heads to Singapore. Some 23 per cent of companies with an office in Hong Kong are considering moving business functions from the city, and nine in 10 of those see Singapore as the best option, according to a poll of 120 companies by the American Chamber of Commerce. 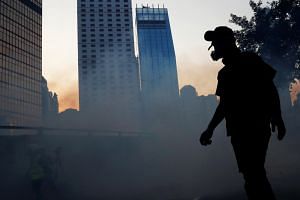 Already, Singapore's Swissotel The Stamford is busier than usual. Bookings have increased compared with the same period last year, according to Marcus Hanna, general manager of the Swissotel as well as Fairmont Singapore. He noted the company was also getting more inquiries looking to move meetings over to Singapore from Hong Kong.

Service providers to some of Asia's wealthiest families say they are fielding a rising number of calls about shifting from Hong Kong, with some already moving money to Singapore-based banks. Goldman Sachs Group Inc. analysts said this month the debate on Hong Kong outflows "will remain active" after modest withdrawals so far.

"You have expats who have been there for a long, long time with families and those are the ones who are first in line to move," said Hong Kong-based global affairs analyst Michael Bociurkiw. "They want to stay in the region but more and more they find it untenable to stay in Hong Kong, so you're going to see a talent train" to Singapore.

Singapore has seen demand for gold storage rise in recent months, according to J. Rotbart & Co, which helps customers buy, store and transport precious metals. The bullion house, which services high net-worth individuals from Hong Kong, saw requests skew to around 75 per cent for Singapore and 10 per cent for Hong Kong, compared with a split of about 50-35 previously.

Lagging investment in Hong Kong has also helped spur on hotel transactions in Singapore, which are set to close out the year at a record high $2.5 billion with a number of deals now in the pipeline, according to a report released last month by Jones Lang LaSalle (JLL). According to data from Colliers International Group, the Hong Kong protests may have helped edge luxury residential sales in Singapore to their highest levels since 2008 amid sudden interest from Chinese nationals looking for an alternative market.

"Recent events in Hong Kong have also induced demand into other gateway markets, with Singapore being seen as one of the key beneficiaries," the JLL report states.

One reason for the shift in investment to Singapore is its similarities to Hong Kong as a developed financial hub. With a firm footing on legal and regulatory issues, the city-state has also earned a reputation as a safe haven, said Song Seng Wun, a private banking economist with CIMB Bank.

"This is when Singapore's neutrality and political stability comes in pretty handy," he said. "People being people, they go where they feel most secure. It's nice and safe here, whether it is for your physical health or monetary health."