SINGAPORE - Retail sales in Singapore rose 25.8 per cent in June on an annual basis, aided by a low base in the same month last year when stricter curbs to contain the Covid-19 pandemic were in place.

The year-on-year growth in June was smaller than the 79.9 per cent jump in May due to circuit breaker measures in place for the whole of May last year.

However, the phase two curbs were reintroduced on May 8 for one week, before Singapore went into phase two (heightened alert) from May 16 to June 13.

The measures were eased on June 14 but the country reverted to the heightened alert phase on June 22.

Excluding motor vehicles, retail sales rose 19 per cent, compared with a 61.7 per cent increase in May.

Total retail sales value - at $3.3 billion in June - continued to be below pre-Covid-19 levels, noted the Singapore Department of Statistics (SingStat), which released the June figures on Thursday (Aug 5).

"Most retail industries, except for supermarkets and hypermarkets, and mini-marts and convenience stores, recorded large year-on-year increases in sales, due to the low base in June 2020 when physical stores were closed for about half of the month," said SingStat.

UOB economist Barnabas Gan said the month-on-month growth in retail sales in June 2021 was achieved despite the implementation of Covid-related curbs in the month.

“For the rest of 2021, we opine that the low base levels seen in the months between July and December 2020 will remain a strong factor in explaining the rebound in retail sales growth,” said MrGan who expects full-year 2021 retail sales to grow by 10 per cent.

Online retail sales made up an estimated 15.4 per cent of June’s total retail takings, compared with 13.8 per cent in May.

The higher online sales proportion in June was due mainly to online promotional events such as the Great Singapore Sale, SingStat said.

Online sales in the computer and telecommunications equipment, furniture and household equipment, and supermarkets and hypermarkets industries made up the bulk of the sales increase in June.

“Although dine-in restrictions were stricter this year compared to June last year, food & beverage sales continued to register a year-on-year growth in June 2021, due to higher demand for food deliveries,” SingStat said. 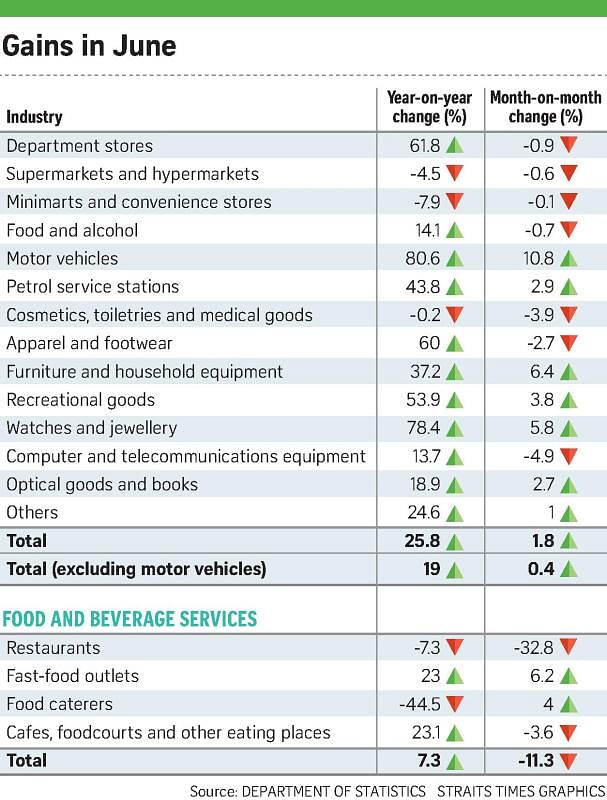 The ban on dining-in was lifted on June 21 this year for groups of two, but last year, up to five were allowed to dine in from June 19.

However, month on month and on a seasonally adjusted basis,  F&B sales dropped 11.3 per cent from May, as in comparison, dining-in for larger groups of up to eight and five were allowed for two weeks in May 2021.

Due to higher demand for food deliveries, cafes, food courts and other eating places saw sales increase 23.1 per cent year on year, while fast food outlets got a 23 per cent bump.

Food caterers, however, were badly hit, with a 44.5 per cent year-on-year plunge in takings. SingStat said this was due to a higher demand for catered meals from foreign worker dormitories in June last year.

Restaurant revenue fell 7.3 per cent year on year, and fell a sharper 32.8 per cent month on month.

Total F&B sales in June was estimated at $529 million - still below pre-pandemic levels, said SingStat. Of this, online F&B sales made up a 47.7 per cent, higher than the 38.7 per cent recorded in May as more people ordered food online with the stricter dine-in restrictions in June.