SINGAPORE (BLOOMBERG) - Singapore, grappling with an ageing population and a shortage of high-tech workers, says it needs to bring in foreign talent in areas including software programming while the country re-balances its education system to meet future demands.

A key issue is whether Singapore has a critical mass of workers to make itself a vibrant economy that will attract investments and encourage enterprise, Education Minister Ong Ye Kung said. The nation will maintain little restriction on foreign labour for high-end jobs such as in artificial intelligence, while keeping a quota system for lower-skilled industries including construction.

"Talent is very short everywhere in the world - AI talent, software programmers," Mr Ong said in an interview in the city-state. "We let them in because we require a critical mass for the sector to take off, while we continue to train Singaporeans for those jobs."

Mr Ong, 48, is among a group of younger ministers under the spotlight who are seen as potential successors to Prime Minister Lee Hsien Loong after a Cabinet reshuffle in April that saw him promoted to lead the education ministry. The tiny and wealthy island-state, one of the world's most trade-dependent economies, is building itself up into a high-tech financial hub and digitally savvy "Smart Nation".

Social security and healthcare are among the biggest policy challenges with Singapore's rapidly ageing population, Mr Ong said, citing government figures showing that a quarter of the country will be 65 or older in 2030. 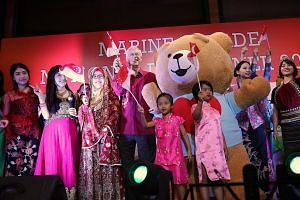 "We need to use an inquiry-based approach to teach students how to exercise critical thinking," he said. "It used to be 'knowledge is power'. Now, power is knowing what knowledge to ignore, and what to take in, and decide for yourself."

He noted that while the system has "strengths that we should not discard", adjustments need to be made between an "over-focus on exam results" and "higher-order outcomes".

"We need to re-balance that so education is more fun, more joy, more holistic and children have a passion and an aptitude in deciding what they want to do," Mr Ong said in the interview on Wednesday (Sept 19). "It's not just my marks but also developing my passion, an idea of my future, my journey, and getting soft skills."

With its current heavy reliance on trade, Singapore is toeing a delicate line as China and the United States - its No. 1 and No. 4 trading partners - duel with tariffs and protectionism.

"The most important bilateral relations in the world are between the US and China," Mr Ong said. "If that doesn't go well, starting with trade, the whole world suffers." 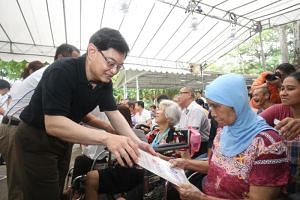 US President Donald Trump this week ordered tariffs on US$200 billion (S$273 billion) of Chinese goods to take effect next Monday, and Beijing announced a retaliation with taxes on US$60 billion of US products. These came after tit-for-tat levies earlier this year.

"Today's rise of identity politics, protectionism - it's not the end game, but we are in the middle of a transition," said Mr Ong, who was also the deputy chief negotiator for the US-Singapore Free Trade Agreement.

"The social media plays a big part in the kind of information people receive and how you feel; it just changes politics, it changes governance in a very deep, fundamental way."

South-east Asia has seen a boost to orders in certain industries whose Chinese suppliers have been slapped with higher duties, though Mr Ong views these as "short-term, tactical calculations" that obscure the danger of an extended discord between the US and China.

"The worry is the medium-, longer-term, whether this then leads to an impact on investors' confidence, on global sentiment," he said. "And I think it will."

On the international stage, Singapore's star has been on the rise, playing host to events that included an unprecedented summit between the heads of the US and North Korea in June.

Mr Ong was in a small band of officials who accompanied North Korean leader Kim Jong Un on a night-time tour and noted his curiosity about how Singapore developed. "Surely, he'll be thinking about how to develop his country too," the minister said.

As for the state of affairs on the Korean peninsula, Mr Ong, a former private secretary to PM Lee, replies with Singapore's trademark diplomacy.

"We do our part for world peace and regional peace, and we hope that it will put relations and the situation on the Korean peninsula on an even keel," he said. "There are ups and downs, and we have to just keep on working at it."