SINGAPORE - Singapore's headline inflation was unchanged in October from September, as private road transport costs again shrank year on year, but climbing electricity and gas prices are still putting the squeeze on consumers.

The consumer price index (CPI), which measures the cost increase for all items, saw 0.7 per cent year-on-year price growth for the third straight month, as inflation in food and retail prices slowed. This was a hair's breadth beneath the 0.8 per cent forecast in a Bloomberg survey of economists.

But core inflation, which strips out housing and private transport costs, rose marginally as the private watchers had predicted from 1.8 per cent in the previous month to 1.9 per cent in October, according to a joint data release from the Monetary Authority of Singapore (MAS) and the Ministry of Trade and Industry (MTI) on Friday (Nov 23).

Rising electricity and gas prices had a hand in driving up the month's inflation.

Costs increased by 16.6 per cent year on year, accelerating from 13 per cent in September, which was attributed to higher electricity tariffs amid higher oil prices.

Food prices were up by 1.4 per cent on the previous year, slightly gentler than the previous month's 1.6 per cent change in prices, as the rise in costs eased for both non-cooked food items and prepared meals.

Retail item prices rose by 1.3 per cent in October, down from the 1.5 per cent year-on-year price growth in the previous month, as inflation cooled for clothing and footwear and medical products, as well as personal effects such as handbags, wallets, watches, costume jewellery and other accessories.

Meanwhile, services inflation came in flat at 1.4 per cent, as higher education fees and holiday expenses were balanced by a slower pace of increase in recreational and domestic services fees and airfares.

Yet private road transport costs continued to fall, and more sharply this time: Prices were down by 0.6 per cent, against a 0.1 per cent dip in September, as a tumble in car prices offset the rising petrol prices. 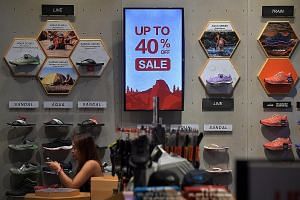 Housing costs fell by 2.5 per cent, the same pace of decline as in the month before.

Housing rentals remained soft, but the slide was more gradual and was balanced by a smaller increase in the cost of housing maintenance and repairs.

MAS and the MTI reiterated their earlier joint statements on the inflation outlook, noting that external sources of inflation have increased in recent quarters.

Higher import and labour costs could be passed on to consumer prices, but "the extent of overall price increases will be capped by greater market competition in several consumer segments, such as telecommunications, electricity and retail", they once more said.

“The key downside risk to our inflation forecasts is global crude oil price which has suffered heavy correction in recent weeks,” he said.

This was a concern also flagged by ANZ Bank economist Khoon Goh.

“Domestic demand-related price pressures from the improving labour market will keep core inflation at around the 2 per cent level over the early part of next year, though this will be offset to some extent by the recent declines in oil prices, if sustained,” he said.

MAS most recently tightened its monetary policy in its October statement, putting the Singdollar's rate of appreciation on a "modest and gradual appreciation path" for "medium-term price stability".

DBS economists Taimur Baig and Nathan Chow wrote in a report out on Friday that the MAS "is, barring global shocks, likely to keep normalising monetary policy in 2019".

"We expect CPI inflation and real GDP (gross domestic product) growth to average 1.8 per cent and 3 per cent respectively in 2019, in the upper half of their official forecast ranges," they added.

MTI, in its first official forecast for the coming year, had said on Thursday that the GDP is expected to grow by between 1.5 and 3.5 per cent in 2019.