SINGAPORE (BLOOMBERG) - As the world tries to curb carbon emissions, Singapore could be a testing ground for new ideas on how to reduce energy use through data and urban design, according to Chan Chun Sing, its trade and industry minister.

Singapore is using data on how different industries and segments of the population use energy to optimise its electricity system, Mr Chan said in a Bloomberg Television interview. It's also experimenting with how designs and material choice in buildings can reduce energy consumption, such as for air conditioning.

The city-state of about 5 million people is small enough that it can make changes to its power grid at a system level, yet large enough that the lessons from those tweaks can be applied to larger markets, Mr Chan said. That will allow Singapore to share its experience with the rest of the world.

"We are not too big and not too small," Mr Chan said in the Thursday interview. "We are in what we call a 'Goldilocks' position with a city of 5 million where you can try many of these new and innovative solutions."

Singapore has shifted its electricity mix over the past century from coal to oil to natural gas, which now generates about 95 per cent of the country's power. The government announced ambitious plans last year to grow peak solar generation to 2 gigawatts by 2025 from about 140 megawatts in 2017.

The government also plans to impose a $5 a ton carbon tax from 2020. The fee will affect large industrial facilities that produce 25,000 tons or more of greenhouse gases a year, such as oil refineries and power plants. The revenue from the tax would be used to fund more efficient energy production and to help companies improve energy efficiency.

Singapore has long been one of the world's largest oil refining and trading hubs, and the carbon tax could reduce profit margins at those plants by about 3 per cent in 2020, according to energy consultancy Wood Mackenzie Ltd. Mr Chan said those plants operate in a relatively more environmentally friendly way than those in other parts of the world. 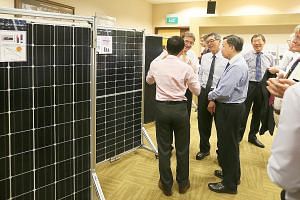 "We are producing in a more efficient way for the rest of the world," he said. "If those products are not produced in Singapore, they would have been produced somewhere else, probably with less efficient, less green, less clean methods."