Factory output rose 8.6 per cent year on year in January for a third straight month of growth, the Economic Development Board (EDB) noted yesterday. This came in below the upwardly revised 16.2 per cent growth rate racked up in December, but topped the 3.6 per cent forecast of analysts in a Bloomberg poll.

If biomedical manufacturing was excluded, output grew 12.1 per cent.

Production in the key electronics cluster rose 19.8 per cent with all segments recording growth except infocomms and consumer electronics.

The semiconductor sector was particularly robust, surging 23.8 per cent on the back of demand from cloud services, automotive and 5G markets.

OCBC Bank economist Howie Lee said the global chip shortage is the biggest reason Singapore's industrial production could continue to outperform in the near term.

"Semiconductors, in particular, are in severe shortage due to increased work-from-home trends, supply chain disruptions from the 2019 United States-China trade war and years of prior de-stocking and under-investment," he added.

The precision engineering cluster also grew, climbing 15.3 per cent thanks to higher output in the machinery and systems segment, which surged 20.2 per cent due to higher production of semiconductor equipment.

Likewise, the chemicals cluster expanded 9 per cent, with all categories recording output growth except in petroleum.

The "other chemicals" segment rose 23.2 per cent owing to higher output of fragrances, while the specialities sector grew 13.5 per cent with increased production of industrial gases and additives. 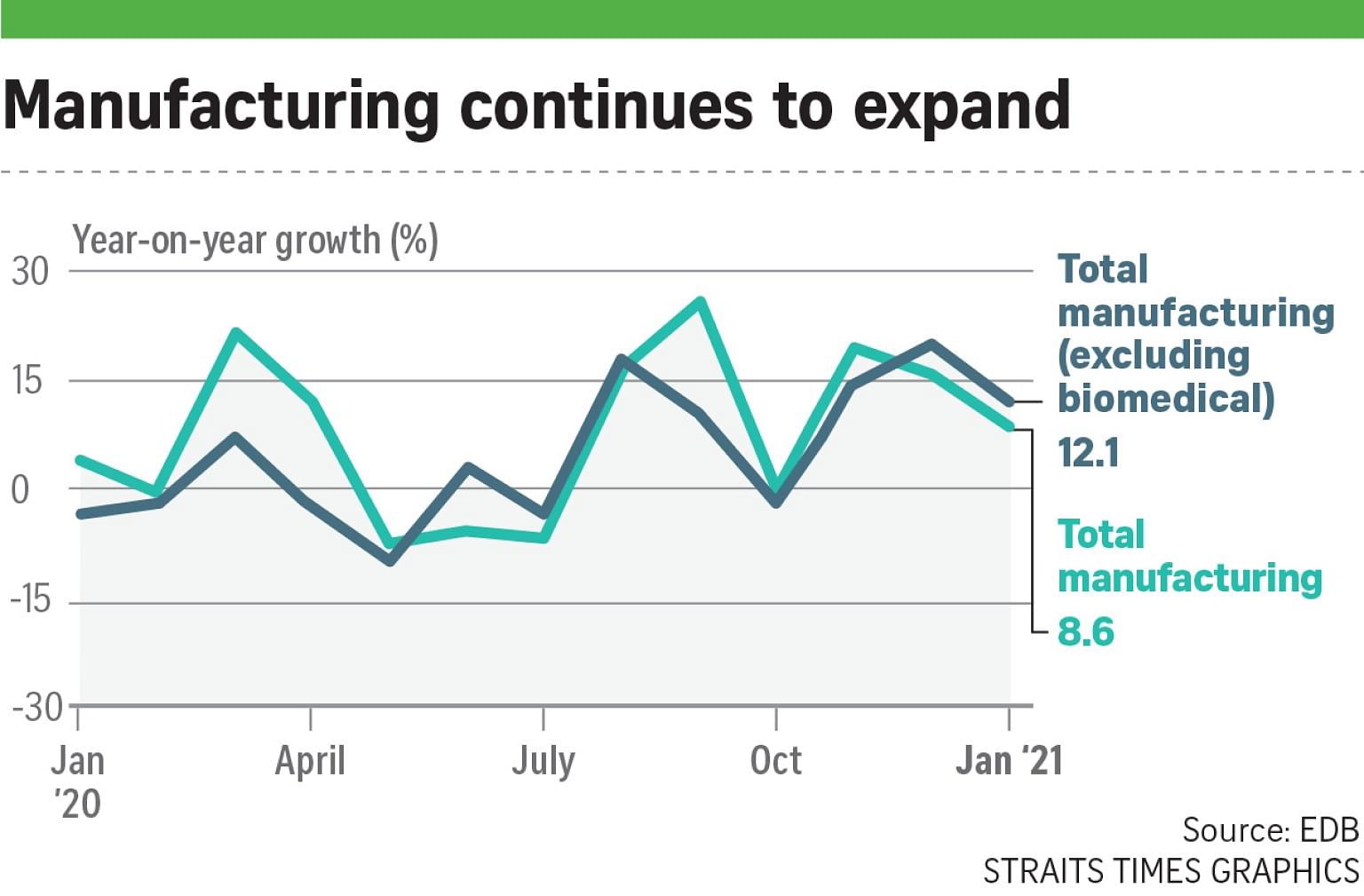 General manufacturing was up 3.3 per cent, with most of the growth coming from the miscellaneous industries segment that rose 7.6 per cent on higher production of wearing apparel and batteries.

Food, beverage and tobacco grew 2.4 per cent due to higher production of beverage products. However, the printing sector fell 4.5 per cent.

Biomedical manufacturing output shrank 8.6 per cent, dragged down by pharmaceuticals, which slipped 16.7 per cent due to a different mix of active ingredients.

The medical technology industry grew 15.2 per cent on the back of higher export demand for medical devices, but transport engineering output fell 19 per cent.

The 36.2 per cent growth in the land segment, due to higher output of motor vehicle parts and accessories, was offset by the continued slump in marine and offshore engineering - down 13.1 per cent - and the aerospace sector, which fell 30.6 per cent.

The EDB said: "The levels of activity in the shipyards and aerospace firms remained low as new orders were adversely impacted by weak global oil and gas market and travel restrictions respectively."

UOB economist Barnabas Gan said sectors that had previously seen a full-year contraction, such as transport engineering and general manufacturing, could revert to positive growth on the back of economic recovery this year amid potentially higher oil prices.

"Singapore, being a trade-reliant economy, will also benefit from the expected recovery in the global external environment as domestic manufacturers gear up to meet the uptick in international demand," he added.

A version of this article appeared in the print edition of The Straits Times on February 27, 2021, with the headline Singapore factory output extends rebound, rising 8.6%. Subscribe