SINGAPORE - Manufacturing sentiment remained gloomy in July, with concerns like the escalating trade war weighing on the sector.

The Purchasing Managers' Index (PMI) - a key barometer of activity among manufacturers - came in at 49.8 last month, the third consecutive month of contraction although it was up 0.2 points from June.

A reading above 50 indicates expansion; one below points to a general decline.

"The global trade uncertainties have created costly disruptions to current supply chains faced by local manufacturers," said Ms Sophia Poh, vice-president for industry engagement and development at the Singapore Institute of Purchasing and  Materials Management (SIPMM), which compiles the index.

July's slight uptick was due to marginal expansion in new orders and factory output, as well as continued growth in new exports, the SIPMM said on Friday (Aug 2).

The PMI for the key electronics sector was also slightly better - it came in at 49.3, up 0.1 point from June but still its ninth month of contraction.

This was due to a slower contraction of new orders, new exports, inventory and employment level.

But analysts believe the outlook for manufacturing for the rest of the year remains bleak.

OCBC Bank head of treasury research and strategy Selena Ling said the trade war is likely to persist for the rest of the year, noting US President Donald Trump's latest threat to hit China with fresh 10 per cent tariffs on another US$300 billion (S$412.8 billion) of Chinese goods.

While the first three tranches of tariffs tended towards industrial goods, meaning that consumers were unlikely to bear the brunt, if Mr Trump follows through on the new threat, the impact would spread to consumer goods, she noted.

"My worry is that the year-end festive season orders may not see the usual seasonal pick-up since the next tariff tranche... will hit US consumers amid the current global growth slowdown," she said.

Ms Ling added that there are other complications as well, such as fallout from the trade dispute between Japan and South Korea. Japan recently decided to strike South Korea off its list of trusted trade partners, deepening a row between the countries.

Maybank Kim Eng senior economist Chua Hak Bin said the threat of added tariffs will likely nudge Singapore into a technical recession this quarter, dashing any hope of a meaningful recovery in the second half of the year. 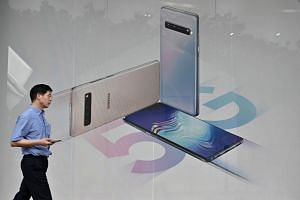 "If things continue to escalate, we'll have to downgrade our growth outlook for next year," Dr Chua added.

Singapore is not the only country to see weak manufacturing sentiment. While some still report PMIs of above 50, including Vietnam, which is seen as the biggest beneficiary of trade diversions to the region, the PMI for other countries including South Korea and Malaysia remains in contraction territory.

But Singapore is among the worse hit, said Dr Chua, because it does not benefit as much from investment or trade diversions, which could help to cushion the fall in overall trade volume.

"Maybe we will see some gains because of what's happening in Hong Kong... But I think it's still early days to see how that will play out," said Dr Chua on the investment front.