SINGAPORE - Takings at the till dropped for the fourth consecutive month in May, according to figures released by the Department of Statistics on Friday (July 12).

Retail sales slid 2.1 per cent compared with the same period last year. But this figure still beat the expectations of analysts polled by Bloomberg, who predicted a fall of 3 per cent.

Excluding motor vehicles, retail sales dropped 1 per cent year on year as against a 2.1 per cent fall in April.

Most retail segments registered a fall in sales compared with May last year.

Motor vehicles and retailers of furniture and household equipment saw takings fall the most, by 7.5 per cent.

The sales of computer and telecommunications equipment declined by 7 per cent.

Sellers of optical goods and books raked in sales that were 4.9 per cent less than May last year. Department stores also saw sales dip by 4.7 per cent. 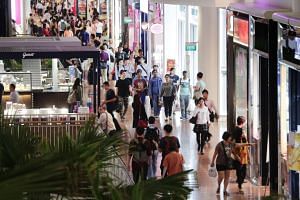 Retail sales disappoint with 1.8 per cent slide in April

However, sales of watches and jewellery grew by 4.1 per cent, due partly to higher demand for gold jewellery arising from the Akshaya Tritiya festival, the Department of Statistics noted.

Sales of petrol service stations also increased by 1.4 per cent, but the sales volume recorded a small decline of 0.6 per cent after the exclusion of the price effect.

Food and beverage services grew by 2 per cent year on year, with restaurants leading the way with an increase in sales of 2.7 per cent.

Other eating places such as cafes also grew by 2.2 per cent, while fast-food outlets saw takings rise by 1.8 per cent.

However, food caterers saw a dip in takings by 1.2 per cent.

The total sales value of food and beverage services in May this year was estimated at $849 million, compared with $833 million in May last year.

The estimated total retail sales value in May this year was about $3.7 billion. Online retail sales made up an estimated 5.3 per cent of this number.