SINGAPORE - Trade in goods between Singapore and the European Union reached a record high of 58.1 billion euros (S$89 billion) in 2018, a 9 per cent increase from 2017, latest data from the European Commission shows.

Singapore exported 21.1 billion euros worth of goods, mainly organic chemicals and pharmaceutical products, in 2018, an 11.7 percent year on year increase. Imports, mainly of machinery and transport equipment, from the European bloc also grew, rising by 4.8 per cent to reach 37 .1 billion euros.

The new trade data included services trade for 2017 but similar data for 2018 is still unavailable.

While Singapore suffered a deficit with the EU on merchandise trade, the 2017 data showed the reverse for investment flow, with more EU investors flocking into Singapore than the other way round.

Foreign direct investment from the EU in 2017 increased by 15.8 per cent year on year, reaching 227 billion euros, cementing the bloc's position as the largest foreign investor in Singapore. Singapore invested 117 billion euros in Europe, 14.7 per cent less than 2016. 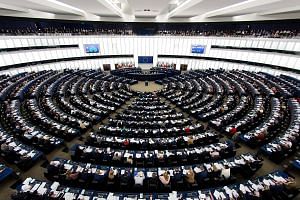 The record-breaking trade figures comes in the wake of a confident nod by European parliamentarians for the upcoming EU-Singapore Free Trade Agreement (FTA), which looks set to be ratified later this year. The EU-Singapore Investment Protection Agreement (IPA) and a partnership and cooperation agreement were also given the go-ahead.

After it comes into force, the FTA will eventually strip nearly all customs duties for Singapore exports to the EU, including Asian food products. Among other benefits, EU companies will enjoy simplified customs processes and a higher degree of intellectual property protection than before.

The EU Ambassador to Singapore Barbara Plinkert said the trade figures between the two jurisdictions was "clear evidence of the dynamic trade and investment relations between two like-minded partners who support free and fair trade".

"The FTA and IPA will further boost economic relations as they facilitate trade and create a transparent framework for investment," she added.

Singapore Manufacturing Federation (SMF) president Douglas Foo said EU firms will be able to use Singapore as a springboard into Asean, while local companies, conversely, will be able to expand their business into the EU.

He cited SMF's Enterprise Europe Network Singapore, a unit formed as part of a larger network set up by the European Commission to help firms explore new trade opportunities in the EU.

Mr Foo, a Nominated Member of Parliament, said: "The current opportunities are the sectors of electronics, pharmaceuticals, petrochemicals and processed food products which currently makes up 10 per cent of Singapore gross domestic product."

As manufactured goods make up a sizeable portion of EU imports into Singapore, firms could feel more competition from EU companies entering the local market.

But Mr Foo said this will benefit consumers overall, as the competition will lower prices and raise quality of both goods and services.

"Firms, especially small and medium enterprises, will therefore need to boost innovation, efficiency, customer service and satisfaction in order to stay ahead and be relevant to consumers," he said.