SINGAPORE - A roadmap to transform the precision engineering sector and build more smart factories has helped kickstart 10 projects since its launch last October.

Three of these projects are being undertaken by multinational firms, three by large local enterprises and four by small-and medium-sized enterprises (SMEs), said Minister for Trade and Industry (Industry) S Iswaran on Monday (Nov 13).

The precision engineering Industry Transformation Map (ITM) was rolled out in Budget 2016 as part of a S$4.5 billion package aimed at providing companies with industry-specific help to digitalise, invest in new technologies and prepare workers for the future.

"I am heartened that companies at different stages of their development are embarking on such projects to strengthen their manufacturing competitiveness by building up in-house digital capabilities," said the minister.

He added that these projects are expected to raise productivity at the companies by 30 per cent on average.

Guidelines for smart factories launched as manufacturers gear up for Industry 4.0

The precision engineering ITM aims to propel the sector's output to S$42 billion by 2020, from S$32 billion in 2014. It also targets to help 50 SMEs receive qualifications as core suppliers to multinational companies in high-growth manufacturing segments by 2020. As of August, 27 companies have qualified, including JEP which supplies key components such as landing gear systems and engine casings to the aerospace sector. 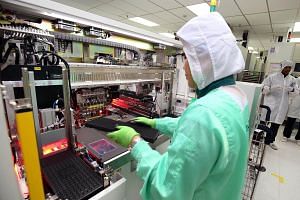 Guidelines for smart factories launched as manufacturers gear up for Industry 4.0

The company invested almost S$35 million in the new factory, pumping money into the large-scale deployment of digital manufacturing solutions in robotics and smart factory software.

The firm specialises in precision machining of specialised materials for the aerospace, semiconductor and oil and gas industries.

JEP - which stands for Joe Eric Partnerships - was founded in 1986 by Mr Joe Lau and Mr Eric Zee, specialising in cutting tools. JEP Precision is part of Catalist-listed JEP Holdings.

"When we were planning to build this plant in 2015, we wanted a plant that can sustain us for the next 10 years at least," said chief executive Soh Chee Siong at the official opening. "Thus we decided to move towards digital manufacturing to achieve a quantum leap in the efficiency and competitiveness of our operations."