SINGAPORE - Budget 2017 sets out a strategy for building a better Singapore in a sustainable way, Finance Minister Heng Swee Keat said on Thursday (March 2), as he wrapped up the Budget debate in Parliament.

He reiterated that the Budget, which he delivered on Feb 20, "strikes a careful balance between reinforcing restructuring efforts and providing support to businesses and households".

The near-term support measures mentioned in this year's Budget total up to $1.4 billion, which is not a trivial amount, he added. 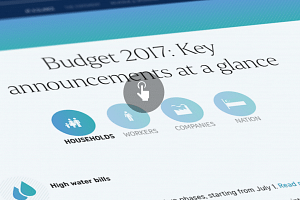 Budget 2017: What were the key announcements?

"These are on top of the substantial stimulus measures introduced in the last three to four years, of which the cumulative effects are still working through the economy."

Firms that are ready to scale up and venture overseas are also provided with help, through measures such as an enhanced internationalisation finance scheme and an International Partnership Fund, Mr Heng said.

As for households and individuals, Mr Heng noted that the Budget included various measures "to open up multiple pathways to success for all, provide assurance in key areas of need and strengthen social safety nets".

For example, he said: "In education, we significantly enhanced the quality, affordability and accessibility for all across all levels from pre-school to tertiary. In housing, we increased housing supply and housing subsidies."

He also touched on the hike in water prices, noting that over the past two days, several MPs had raised concerns about the increase in living costs.

But the hike is needed to help cover the rising cost of delivering water to Singapore homes and businesses, he noted.

"Ms Sylvia Lim asked why raise water now and carbon tax later... Now Mr Seah Kian Peng highlighted yesterday that the Government spends more than it collects on the water system. And this is indeed the case," he said.

"The revenue which PUB collects from users is only enough to cover operations and the depreciation of water works, pipelines and water reclamation plants," Mr Heng said.