HONG KONG (BLOOMBERG) - The new tariffs that US President Donald Trump has threatened on US$300 billion of Chinese goods would drag China's annual economic growth below 6 per cent, according to a Bloomberg survey, which would be the slowest expansion since 1990.

Once introduced, the extra 10 per cent tariffs would cut up to 0.5 percentage point from gross domestic product expansion compared with the previous year, according to the survey of 14 economists by Bloomberg. With the nation's growth already forecast to slow to 6 per cent next year, that would drag it below the lower bound of the government's current economic target.

The outlook underlines what's at stake for the world's second-largest economy as it faces weakening demand at home and the downdraft of the trade war with the US However, Trump has already delayed some of the tariff increases due to take effect from Sept 1 amid economic turbulence, and face-to-face talks due to resume next month offer a chance for further reprieve.

"The US moves will pose some challenges to China's exports and economy, but overall, the impact is controllable," Ministry of Commerce Spokesman Gao Feng said in a press conference on Thursday. "China will be forced to retaliate if the US follows through with new tariffs," he said.

The new tariffs will subtract between 0.5 and 1 percentage points from China's export expansion, according to 7 of 12 analysts who answered a question on that. Currently the US will impose some of the tariffs from Sept 1, while the rest will go into effect in December.

Trump said Wednesday that he's the "chosen one" to wage a trade war with China and asserted that he's winning.

"This is a trade war that should have taken place a long time ago," Trump told reporters at the White House. He added: "Somebody had to do it. I am the chosen one." 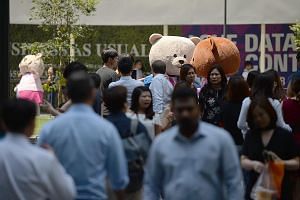 How a long-drawn US-China trade conflict could affect Singapore

Even with the politically-sensitive 70th anniversary of the Communist Party approaching in October, policy makers are showing little sign of wanting to roll out large-scale stimulus to prop up the growth numbers.

Instead, officials have tweaked policy settings and are prioritizing stability. The authorities are mulling an increase in regional-government bond quotas that allow infrastructure spending, and the central bank has pushed through a reform that may lower borrowing costs.

In a separate survey, analysts said they didn't expect the People's Bank of China to cut its rates on medium-term funding next week.