Reserve Bank Governor Adrian Orr and his policy committee slashed the official cash rate to a record low 1 per cent as slowing economic growth prevents inflation from returning to the central bank’s goal. Most economists expected the RBNZ to deliver a quarter-point cut in the OCR.

Orr signaled further easing could be possible and even hinted at non-conventional policy as the global outlook darkens amid a worsening economic conflict between the US and China.

“It’s easily within the realms of possibility that we might have to use negative interest rates” or other non-standard measures, Orr told a press briefing in Wellington. Still, cutting rates by 50 basis points today “probably reduces the probability” of having to use such tools, he said.

The New Zealand dollar or kiwi plunged 2 per cent to US$0.6397, having earlier hit US$0.6378 on the surprise move. Ten-year bond yields fell 14 basis points to a record-low 1.158 per cent. The Australian currency fell to its lowest since 2009 on bets the Reserve Bank of Australia will follow its New Zealand counterpart. 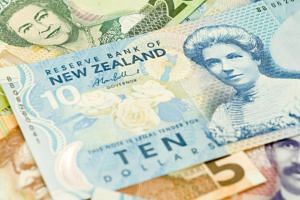 New Zealand and Australia, who came through the global financial crisis without having to resort to unconventional policy, now find themselves bracing for an economic slowdown with borrowing costs at record lows and little ammunition to deliver further stimulus. Australia last month cut its benchmark to 1 per cent and economists see further reductions in both economies as domestic demand slackens and trade tensions between the US and China threaten to curb exports and commodity prices.

New Zealand’s central bank was the first among developed economies when it cut in May and now becomes the first to deliver a half-percentage point reduction this easing cycle. The last time the RBNZ cut rates on such a scale was in March 2011, following a series of devastating earthquakes in the South Island city of Christchurch.

“We are very surprised,” said Dominick Stephens, New Zealand chief economist at Westpac Banking Corp in Auckland. “The RBNZ appears to be trying to get ahead of the curve.”

Policymakers everywhere have been forced to consider more stimulus as fears grow over the broadening fallout of the US-China trade dispute on the global economy.

Last week, the US Federal Reserve cut rates for the first time in a decade, while the RBA eased in both June and July.

Markets are wagering the European Central Bank and Bank of Japan will have to follow or risk their currencies rising to uncompetitive levels.

Investors this week feared Beijing had opened a new front in the currency conflict by allowing its yuan to weaken past 7 per US dollar, pressuring competitors to follow suit. Those fears were underscored after Washington labelled China a currency manipulator in a dramatic escalation of the trade dispute between the world’s biggest economies.

Orr all but acknowledged the motive for his move by saying the single biggest challenge to NZ policy was how low interest rates were elsewhere in the world.

“Offence is the best form of defence,” said Josh Williamson, an economist at Citi. “Committee members were more concerned about global growth headwinds and the potential impact on the New Zealand economy via the trade channel.”

Asked if today’s cut means no more to come, Orr said: “No, today’s decision doesn’t rule out any future action.”

He said the bank’s forward path, which shows the average OCR falling to a low of 0.91 per cent late next year, was “good guidance” as to “how we see the interest rate path unfolding.”

The projection implies the chance of another quarter-point cut. Economists at lenders including Bank of New Zealand now expect a cut to 0.75 per cent in November. That raises the risk of non-standard policy eventually being deployed.

The RBNZ is “well advanced” on developing a suite of tools for unconventional policy such as negative interest rates, asset purchases, forward guidance and other forms of intervention, Orr said, adding it would be “negligent” not to be doing the work.