BRUSSELS (AFP) - Representatives of Greece's creditors will begin talks in Athens on Monday on a third bailout package to the debt-swamped Greek government, the IMF and European Commission said.

"The teams will arrive in Athens on Monday and meetings will begin immediately," a spokesman for the European Commission said Sunday.

In hammering out details of a third bailout package for Greece of up to €86 billion (S$130 billion), those three organisations will be joined by a fourth negotiator, the European Stability Mechanism. 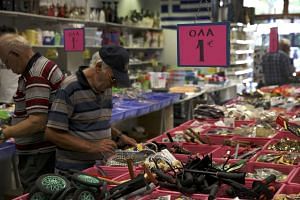 The European Commission spokesman did not say whether the teams arriving Monday would be composed only of technical experts, or would also include heads of missions from the four organisations.

But an IMF spokesman indicated in an e-mail to AFP that the "technical team will start work in Athens on Monday to take stock of recent developments" - phrasing that suggests the institution's head of mission would not attend the initial session.

The date and venue of the talks has been uncertain since the leftist-dominated Greek parliament earlier this week approved two sets of tough reform and austerity conditions that creditors had insisted on.

Despite acceptance of those conditions it had long vowed to reject, the hard-left government of Greek Prime Minister Alexis Tsipras has resisted negotiation models used by previous Athens cabinets and the widely loathed creditors.

A Greek government source said Saturday that the talks would not begin until Tuesday.

Athens and Brussels hope the terms of the new bailout can be finalised by mid-August, with cash-strapped Athens facing a €3.2 billion repayment to the ECB on Aug 20, and a €1.5 billion reimbursement to the IMF the following month.