SINGAPORE - An increasing number of Singapore jobseekers are expressing interest in working for a start-up, according to results from recruitment firm CareerBuilder Singapore's Employer of Choice Survey 2018.

The top reason for this includes a perceived availability of learning opportunities (82 per cent), followed by the ability to work closely with a group of passionate and enthusiastic colleagues, and an exposure to a wide spectrum of job roles.

However, for those who would not work in a start-up, 78 per cent cited the lack of job security as the business may fail compared to 61 per cent which cited the relative lower pay as a deterrent.

According to the survey, jobs in banking/finance/investment seem to have lost their lustre in 2018, falling from first place in 2017 to fifth position last year. The most sought-after jobs were in the healthcare/medical industry, followed by government and education/training.

A slightly higher percentage of fresh graduates indicated "five years" as their expected time to become a manager, as compared to "three years" cited in 2017's results. 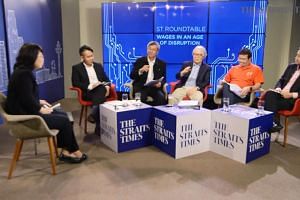 Are workers in Singapore getting a fair share of the pie?

Report: Singapore could be among best places to hire tech talent

This year's results also suggest that graduates may not be the job-hoppers that they are often made out be: more than half (55.1 per cent) of graduates expect to change jobs no more than twice in the next 10 years.

Overall, the survey found that remuneration remains important to jobseekers, with 88 per cent of respondents stating that the top trait for an employer of choice is one that "offers attractive pay, bonuses and other monetary compensation".

Coming in a close second was a workplace that offers "good career growth and opportunities", which was selected by 87.7 per cent of respondents.

When it comes to reasons why staff would switch jobs, the lack of career growth was cited by 66.1 per cent of the respondents as the top motivation. This was followed by unhappiness with superiors (44.9 per cent) and "an unfriendly work culture" (43.7 per cent).

CareerBuilder announced that the top private employers of choice remained the same in 2018, with tech giant Google in top place for the fourth consecutive year.

Among the government/government-linked employers of choice, the Monetary Authority of Singapore and Singapore Tourism Board retained their titles as first and second in the category.

The Top 10 Start-up Employers of Choice saw Carousell and Redmart in the first and second places for the third year running, while honestbee rose one position to third place.

The Employer of Choice Survey 2018 was conducted between May and October 2018, among over 3,000 working adults as well as tertiary undergraduates aged 16 years and above.