Growth in real total wages - which accounts for inflation of 0.4 per cent - also picked up again after two consecutive years of slowing down. They rose by 4.2 per cent on average last year, up from 3.2 per cent in 2017, said the Report on Wage Practices released by the Ministry of Manpower (MOM) on Wednesday (May 29).

This includes higher bonuses of 2.06 months of basic wage last year on average, up from 2.0 months.

Better pay last year came on the back of strong employment growth, lower unemployment and fewer retrenchments for Singaporeans and permanent residents, said the ministry, despite Singapore's economy slowing to 3.1 per cent growth last year from 3.7 per cent in 2017.

As a result of firms' improved profitability, the percentage that raised wages in 2018 increased to 67 per cent from 65 per cent in 2017. The proportion of firms that cut wages also fell, to 9 per cent last year from 12 per cent previously. 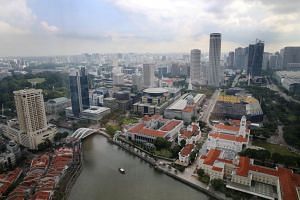 The industries which posted the highest wage growth last year were financial and insurance services, and professional services. On the other hand, manufacturing, food and beverage services and retail trade saw similar or moderated wage growth compared with the year before.

Low-wage workers were not left out. About six in 10 companies gave wage hikes to their low-wage employees last year, similar to the share who did so the year before. But only 45 per cent adopted the quantum of $50 to $70 recommended by the National Wages Council (NWC) for 2018 to 2019.

Low-wage workers refers to those earning up to $1,300 in basic wage, after the threshold was raised last year from $1,200.

The ministry's report is based on a survey conducted from Dec 18 last year to March 19 this year, which covered some 5,300 private sector firms with at least 10 employees.

In all, these firms had 1.2 million employees including 584,100 local full-time workers with at least one year of service and 187,900 with less than a year of service or on part-time work. The rest are foreigners.

"This especially for the case of manufacturing sector where productivity is higher than wage growth over the last five years," he said in a Facebook post on Wednesday.