SINGAPORE - After 40 years of operating out of a "good-class bungalow", multi-material recycling and waste management company Wah & Hua will move into a "condominium unit" at the new high-rise industrial facility Kranji Green when it is completed next year.

The six-storey Kranji Green, which will house waste management and recycling firms, will feature shared facilities to promote greater interaction among the community and facilitate re-use of industrial waste and by-products.

It is part of rejuvenation plans unveiled on Thursday (Feb 6) for the Sungei Kadut industrial estate, which is home to the likes of timber and furniture companies.

For example, a load of recyclables that comes to Kranji Green can be efficiently sorted out with different materials such as plastics and paper sent to companies specialising in handling them, while wood waste can be sent to other companies which use wood waste in their products, she said.

"With all these easy accessibility (between companies within the industry), it reduces the carbon footprint and time, and it is more efficient and productive for the workers as well," said Ms Tan, who is also chairman of the Waste Management & Recycling Association of Singapore.

Wah & Hua is also looking at robotic forklifts and automated maintenance of its equipment for its new facility at Kranji Green, she added.

Ms May Yap, chief executive of wooden pallet manufacturer LHT Holdings, said her company is building a five-storey factory that will be near Kranji Green.

Construction of the factory, which will have more than 480,000 sq ft of floor space, started earlier this month and it is slated for completion around the end of 2021 or the start of 2022, she noted. 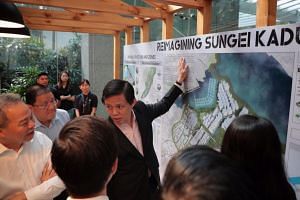 "It is very hard to get Singaporeans to work in our industry, so we have been trying to make our recycling business more automated and environmentally sustainable to attract them," Ms Yap said in Mandarin, adding that one of the innovations the firm has looked into includes reducing the noise produced by its equipment.

The two sites were selected for their great potential for rejuvenation given their proximity to residential areas and major transport nodes, JTC said.

Other notable industrial rejuvenation projects mooted in recent years include the redevelopment of Paya Lebar Air Base and Pasir Panjang Power District.

Development of Jurong Innovation District, whose first phase is expected to be completed around 2022, and Punggol Digital District, slated for completion from 2023, are under way.