TOKYO (REUTERS) - Japan's exports in December fell the most in more than two years, dragged by plummeting shipments to China and regional markets as weak global demand and US-China trade frictions take their toll on the trade-reliant economy.

Exports in December fell 3.8 per cent from a year earlier, Ministry of Finance (MOF) data showed on Wednesday (Jan 23), bigger than a 1.9 per cent drop expected by economists in a Reuters poll. It was the sharpest year-on-year decline since October 2016.

The trade data underscores rising external pressure on the world's third largest economy and comes hours before the Bank of Japan delivers its policy decision at a two-day meeting ending later in the day.

Soft exports will likely dent Japan's economy over the coming quarters, already feeling the strain from a slowdown in China - a major market for its key manufacturers who ship equipment and supplies used by Chinese manufacturers of semiconductors, mobile phones and other goods.

"Net trade should have remained a drag on GDP growth in the fourth quarter," Marcel Thieliant, senior Japan economist at Capital Economics, wrote in a report. "We think it will remain weak this year."

The pressure on output at home looks set to rise, with data this week showing China's economy struggling to shake off the effects of a trade war with the United States, sending 2018 growth to the lowest in 28 years. The International Monetary Fund has also trimmed its global growth forecasts.

Exports to China, Japan's biggest trading partner, fell 7 per cent in the year to December, the data showed. With the US-China trade war already rippling through global supply chains, the worry is that a severe disruption could drive down corporate profits in Japan and other countries, and tip major economies into sharp downturns. 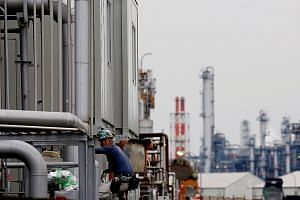 A Reuters poll of economists showed the heightened external pressures have increased the chances of Japan sliding into a recession this coming fiscal year starting in April.

Japan's shipments to Asia, which account for more than half of overall exports, fell 6.9 per cent in December.

US President Donald Trump has criticised Tokyo as well as Beijing over trade, threatening to impose steep tariffs on imports of Japanese cars, which make up about two-thirds of Japan's US$69 billion (S$93.83 billion) annual trade surplus with the United States.

Wednesday's trade data showed exports to the United States rose 1.6 per cent in December from a year earlier, led by shipments of semiconductor production equipment and car motors. US-bound auto exports grew 1.9 per cent to 169,319 units.

Japan's imports from the United States rose 23.9 per cent, led by aircraft and crude oil, helping reduce its trade surplus with the country by 20.3 per cent on the year to 567.8 billion yen (S$7.05 billion). It was a sixth straight month of decline.

Japan's overall imports in December rose 1.9 per cent from a year earlier, bringing the trade balance to a deficit of 55.3 billion yen and marking an eighth month of shortfalls in 2018.

That led to Japan's first full-year trade deficit since 2015 when it was reeling from a spike in fuel imports to make up for the loss of nuclear power following the 2011 Fukushima disaster.