WASHINGTON (REUTERS) - The US Federal Reserve cut interest rates on Tuesday (March 3) in a bid to shield the world's largest economy from the impact of the coronavirus, but the emergency move failed to comfort US financial markets roiled by fears of a deep and lasting slowdown.

Indeed, though Fed chairman Jerome Powell reiterated his view that the US economy remains strong, he acknowledged that the spread of the virus had caused a material change in the US central bank's outlook for growth.

The virus causes respiratory illness that has been fatal in an estimated 2 per cent of cases, and governments and companies have shut schools and restricted travel and large gatherings in response, crimping factory output in China where the outbreak began and disrupting production of goods worldwide.

"The virus and the measures that are being taken to contain it will surely weigh on economic activity, both here and abroad, for some time," Powell said in a news conference shortly after the central bank said it was cutting rates by a half percentage point to a target range of 1 per cent to 1.25 per cent.

"We've come to the view now that it is time to act in support of the economy," he said.

"I do know that the US economy is strong and we will get to the other side of this; I fully expect that we will return to solid growth and a solid labor market as well."

Still, he acknowledged the outlook is uncertain and the situation "fluid."

The decision was unanimous among policymakers. It was the first rate cut outside of a regularly scheduled policymaker meeting since 2008 at the height of the financial crisis, underscoring how grave the central bank views the fast-evolving situation.

Just over a week ago, most Fed officials said they expected the effects of the virus to be temporary and stuck to their view that after three rate cuts last year the US economy was well-positioned to weather shocks. 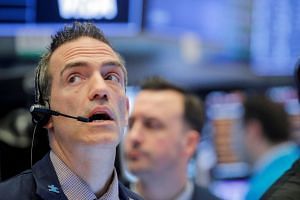 "The questions now become whether, how much, and when the Fed might deliver further monetary policy easing," Oxford Economics analyst Gregory Daco wrote in a note. "If Fed officials deem that odds of an impending recession are elevated, they'll continue to be very aggressive in cutting rates."

After the Fed's cut and initial jubilance on Wall Street over the early arrival of a rescue action from the central bank, losses in all three benchmark stock indexes deepened.

The yield on the 10-year US Treasury dropped below 1 per cent for the first time ever. Interest-rate futures traders priced in further Fed rate cuts in coming months.

"Normally, markets would welcome a rate cut, and they were hoping for it," said Peter Kenny, Founder of Kenny's Commentary. "Now that we've got it, the question is what's next?"

With 90,000 cases worldwide in 77 countries and territories, the virus has upended global supply chains, with companies daily warning of hits to their sales and profits.

On Tuesday, the International Monetary Fund and World Bank cancelled their April meetings in Washington, joining the list of organisations pulling the plug on planned events.

The Fed's decision to cut interest rates before its scheduled policy meeting in two weeks reflects the urgency with which it feels it needs to act in order to prevent the possibility of a global recession, and opens the possibility that more action could come sooner than later.

Coronavirus will weigh on US economy for 'some time': Powell
'Do it more, do it a little bit more': Trump urges Fed to lower rates

Central bank easing can lubricate credit markets and boost demand by lowering the cost of borrowing. But, Powell noted, it cannot repair disrupted global supply chains or convince people to fly, attend meetings or even go to school, especially if local governments or companies bar such activities.

"We do recognise that a rate cut will not reduce the rate of infection, it won't fix a broken supply chain; we get that, we don't think we have all the answers," Powell said.

Still, he said, it will help support "overall economic activity."

Powell had earlier on Tuesday taken part in a conference call with the top finance authorities from the world's seven largest advanced economies, which concluded with a statement that they would take all appropriate measures to support the global economy.

At his news conference, Powell said the Fed was in active discussions with other central banks, and said future coordinated action could yet arrive.

Already there has been action by other central banks. Earlier on Tuesday, central banks in Australia and Malaysia cut rates and on Monday the Bank of Japan took steps to provide liquidity to stabilise financial markets there.

US Treasury Secretary Steven Mnuchin applauded the Fed's decision, saying it would help the US economy. In a tweet after the Fed move, President Donald Trump kept up what has been constant pressure on the central bank to do even more.