WASHINGTON (AFP) - The International Monetary Fund said it stands is prepared to work with Greece and European Union partners to advance the third bailout effort for the country agreed early Monday.

The deal struck with European leaders in Brussels requires an IMF role to join in supporting and monitoring the Greek economy, even as the Fund's current loan program has been suspended since the country defaulted on a 1.5 billion euro (S$2.26 billion) payment at the end of June.

"The IMF stands ready to work with the Greek authorities and the European partners to help move this important effort forward," Fund spokesman Gerry Rice said in a statement after the provisional deal was announced. 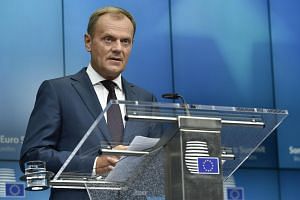 Greece is supposed to pay the Fund another 500 million euros by the end of Monday, and is expected to miss that payment as well as it awaits full, formal approval of the new bailout, which is contingent in the first place on the Greek government taking several specific reform actions by Wednesday.

According to the agreement released by the European summit, a confirmed deal would bring a quick release of several billion euros which Athens could use to make good on obligations to the IMF "in the coming weeks," allowing the Fund to restart the loan program that goes through March 2016.

The new deal requires Greece to then ask for a new financial support program from the IMF beyond that date, in parallel with the new funds being committed by European creditors.