BALI (REUTERS) - International Monetary Fund chief economist Maurice Obstfeld said on Tuesday (Oct 9) that he was not concerned about the Chinese government's ability to defend its currency despite the recent depreciation of the yuan.

"No, I don't think it's a problem," Obstfeld said when asked about the issue on the sidelines of a news conference at the IMF and World Bank annual meetings in Bali.

But also told the news conference that Beijing would face a "balancing act" between actions to shore up growth and ensure financial stability.

China's yuan currency has faced strong selling pressure this year, losing over 8 per cent between March and August at the height of market worries, though it has since pared losses as authorities stepped up support.

On Tuesday, China's central bank fixed the yuan's official mid-point for trading at 6.9019 per US dollar, edging close to the psychologically important 7.0 barrier and helping to send Asian stocks to a 17-month low.

A US Treasury official on Monday repeated that the Trump administration was concerned about the yuan's recent weakening as the department prepares a semi-annual report on currency manipulation due out next week. 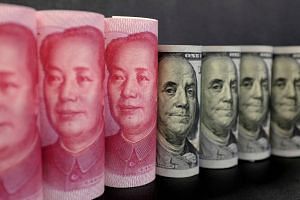 Everyone's fleeing China stocks as foreigners dump $1.96b worth on Monday

The IMF has been recommending that Chinese authorities de-emphasise the quantity of growth to focus more on its quality and sustainability to allow the economy to better withstand shocks, Obstfeld said.

The IMF chief economist said that while government officials have been moving to rein in China's credit expansion, it was understandable they would take steps to boost growth in the face of trade tensions with the US, and these have impacted short-term economic growth, affecting the yuan.

"They do have to balance those actions against the need to achieve a more stable financial sector, to achieve more deleveraging, and they have to exert better control over local government financing. It's definitely going to be a balancing act for them."

Despite a larger than expected drop in China's foreign exchange reserves in September, the government is still equipped with ample reserves of over US$3 trillion. There have been few signs of a spike in capital outflows like those seen in 2015 after a surprise devaluation by the People's Bank of China.

Beijing has put tight capital controls in place to prevent capital flight and the central bank has said it expected the scale of China's foreign exchange reserves to remain stable despite fluctuations.