The profit warning and weak quarterly results were another blow to FedEx, which slashed its forecast in December citing a sharp downturn in worldwide trade.

The package delivery industry is widely seen as a bellwether for the global economy.

FedEx bought that struggling business in 2016 for US$4.8 billion and has had difficulties integrating it into its own network.

FedEx expects integration costs to exceed US$1.5 billion and said in a regulatory filing that it will complete a project allowing packages to flow between the FedEx Express and TNT Express networks by the end of 2020, more than four years after acquiring the Dutch delivery company.

Adding to those challenges, a 2017 cyberattack on TNT's European technology systems cost FedEx some US$300 million to fix and sent a number of high-value, time-sensitive customers into the arms of stronger operators in Europe. 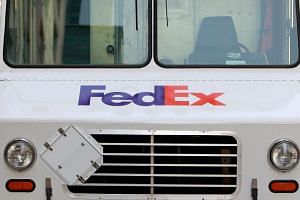 Germany's Deutsche Post DHL earlier this month said it saw no noticeable signs of a slowdown on the horizon, adding that its broad geographic and operational base would make it resilient even if global economic growth weakened.

Atlanta-based UPS has less international exposure than FedEx and said in January that US results helped buffer the impact of global economic softening.

FedEx has shaken up management, including at its Express division, offered voluntary buyouts and limited discretionary spending to stem declines.

Profit for the fiscal third quarter that included FedEx's peak holiday shipping and gift return season fell to US$797 million, or US$3.03 per diluted share, below analysts' average estimate of US$3.11 per share, according to IBES data from Refinitiv.