"On the national outlook - 2 per cent GDP growth, the economy continuing to add lots of jobs, low unemployment - that's the most likely case," Williams said on Thursday (March 28) while answering questions during an event in San Juan, Puerto Rico. "So, I still see the probability of a recession this year or next year as being not elevated relative to any year."

Williams, who is also vice chairman of the Fed's rate-setting Federal Open Market Committee, was speaking days after the yield curve inverted for the first time since 2007, as yields on three-month Treasury securities rose above 10-year yields. The inversion may indicate investors now think lower interest rates in the future are more likely than higher rates, a development that has historically preceded recessions.

"There's a lot of reasons to think that it has been a recession predictor for reasons in the past that kind of don't apply today," Williams said. "I think it's telling us that growth will be pretty modest" in the US and global economies going forward, he added.

The New York Fed chief echoed the message from the FOMC's most recent policy meeting, which concluded March 20. The committee left the target range for its benchmark overnight rate unchanged at 2.25 per cent to 2.5 per cent, and surprised investors by signaling it no longer expected it would be appropriate to raise interest rates in 2019.

Fed Chairman Jerome Powell explained the decision during a press conference afterward by citing downgrades to the outlook for US economic growth, in part due to a slowdown overseas.

Williams said the current unemployment and inflation rates in the US are close to the Fed's goals. 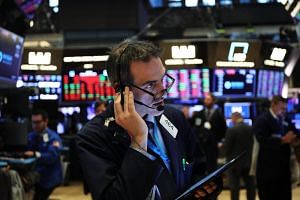 "From my point of view, monetary policy is around neutral in terms of the short-term interest rate," he told reporters Thursday. "Any development in the economy, whether it's on the employment side or on the inflation side, that moved in a persistent way away from our objectives, one way or the other, would be a reason to rethink the path of policy going forward."

Puerto Rico is included in the geographic region that falls under the New York Fed's purview. The trip marked Williams's first visit in his new role at the New York Fed, which he assumed in June. He stressed the need for the island economy to get its finances in order.

"When I talk to people, business leaders or others, what they tell me all the time is, what we need is clarity, transparency and certainty around this," he told reporters. "So, I don't think we're there yet, partly because of some of the legal uncertainties, and partly because some of the decisions still need to be made, and it's not clear completely how that will work."

When asked whether he saw any spillovers from Puerto Rico's woes into the broader market for US municipal debt, Williams said it wasn't obvious.

"That's always the concern: as these issues become resolved, how will that spill over into investor sentiment?" he said. "And so far, I don't think there's been a big impact."