LONDON (REUTERS) - Britain risks suffering an even bigger hit to its economy than during the global financial crisis 10 years ago if it leaves the European Union in a worst-case Brexit scenario in four months' time, the Bank of England (BoE) said on Wednesday (Nov 28).

Hours after the government issued its own stark warning about a no-deal Brexit, the BoE said the economy could shrink by as much as 8 per cent in about a year.

The two reports could add to pressure on lawmakers to drop their opposition to the Brexit agreement that Prime Minister Theresa May struck with other EU leaders on Sunday (Nov 25), which is far from certain to be approved in Parliament on Dec 11.

However, supporters of a more definitive break with Brussels quickly dismissed the reports as scaremongering, while advocates of closer ties said the forecasts demonstrated that promises of greater prosperity outside the EU had been a lie.

The BoE said the "disorderly" scenario - involving severe delays at British borders and financial markets' loss of confidence in British institutions - was not its base case.

But if it happened, there would be a 25 per cent tumble in the value of the sterling - taking it close to parity against the dollar - a spike in inflation to 6.5 per cent from around 2.4 per cent now, and a jump in interest rates. House prices would fall by 30 per cent.

The sterling gave up earlier gains as the BoE outlined its various scenarios. 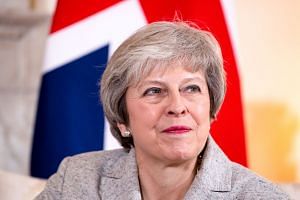 Theresa May backs down over Brexit votes in Parliament, official says

It said a merely "disruptive" Brexit, with goods flowing across borders but facing tariffs and other barriers, would cause a 3 per cent fall in gross domestic product.

"PREPARED FOR THE WORST"

"Our job is not to hope for the best but to prepare for the worst," BoE governor Mark Carney told a news conference, noting that Britain's banks could cope with the worst Brexit shock.

A deal that keeps Britain and the EU in a close future relationship could lead to faster economic growth than what the BoE pencilled in earlier this month, the central bank said.

But all of the BoE's scenarios assumed interest rates will rise. In the worst-case Brexit, rates could rise to 5.5 per cent - a level last seen in 2007, before the financial crisis - from the current base rate of 0.75 per cent.

Hours earlier, the government acknowledged that any Brexit option would be worse for the economy than staying in the EU, but said that leaving the bloc without any agreement with Brussels would weigh heavily on growth at least into the 2030s.

By contrast, the plan that Mrs May agreed on with EU leaders on Sunday "delivers an outcome that is very close to the economic benefits of remaining in", finance minister Philip Hammond said.

The government and BoE reports triggered angry responses from hardline eurosceptics, who viewed the statements as a repeat of dire official warnings intended to sway voters before 2016's referendum.

"I'm afraid we must be ready for Project Fear 2.0," said former Brexit minister David Davis, who quit in July in protest at Mrs May's plans.

"Does anyone really believe any of this as a real-world scenario?" he said. "The Bank of England is undermining its credibility and independence by giving such prominence to these extreme scenarios and forecasts."

"Parliament has demanded this analysis," he said. "It's not supposed to make people scared, it's supposed to provide reassurance that, even if this happened, which is not likely, the system is more than ready for it."

Opponents of Brexit said the projections gave the lie to promises made by Brexit campaigners before and after the referendum.

"These figures show that the government's stated policy is to make our economy smaller and weaker," said Mr David Lammy, an opposition Labour Party lawmaker who wants Britain to stay in the EU.

The government report said that, in a scenario based on the Brexit plan that Mrs May announced in July, rather than Sunday's amended agreement with EU leaders, national output would be 2.1 per cent smaller in just over 15 years' time than if Britain remained in the bloc.

If there was no deal, it would be 7.7 per cent smaller.

Assuming zero net migration from the EU in the future, the hit to the economy would be bigger: 3.9 per cent under Mrs May's deal, and 9.3 per cent without a deal.

The report said Britain's automotive and chemicals sectors faced the biggest potential losses from a no-deal Brexit - more than 20 per cent of output.

Brexit supporters say Mrs May's deal will hurt Britain over the long term by making it harder to strike trade deals with faster-growing countries and regions beyond Europe, and it is not clear that lawmakers will be swayed by the latest forecasts.