SINGAPORE - Thirty-nine per cent of employees in Singapore, or roughly two in five, plan to change employers this year, and of them, 40 per cent say a "limited career path" is their key motivating factor.

This desire for a new career opportunity comes despite the less than bullish outlook on the economy and jobs market, Randstad noted.

"Even though the market sentiments on the economy and labour market are cautious this year, people are still actively looking for new jobs, particularly those who feel that they are facing a roadblock in their career," said the recruitment firm.

According to findings from Randstad's Employer Brand Research 2019 report, out of all Singapore respondents, millennials were the most likely to make the switch at 43 per cent, followed by Generation X employees (those born during early-to-mid 1960s to the early 1980s) at 41 per cent.

When it comes to different generations, the study found younger workers being attracted to employers with pleasant work environments and good training.

One in three millennials (33 per cent) would apply for jobs in companies that provide robust training programmes for continuous career and skills development, while 42 per cent of Gen Z candidates (those born during the mid-1990s to mid-2000s) look for "interesting jobs that they can feel excited about".

Mature workers were found to value flexibility and strong management. The study found 38 per cent of experienced professionals aged 35 and 54 seek companies which offer flexible work arrangements. This contrasts with data which sees 69 per cent of millennial workers saying they do not mind working in the office. 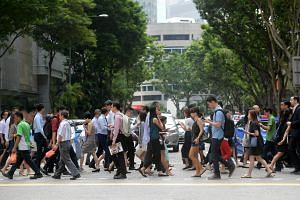 Singapore has highest rate of discrepancies in job applications in Asia-Pacific: Study

"Younger people do not mind working in the office as it places them in an environment where they can be most productive, since they will have easy access to resources as well as people to exchange ideas with," Jaya Dass, managing director of Randstad Singapore and Malaysia, said.

Across the board, attractive salary and benefits remain the most important criteria for 65 per cent of respondents, followed by good work-life balance at 61 per cent. Next is job security at 42 per cent and career progression at 39 per cent.

Work-life balance and the use of latest technologies are top areas which see the biggest gap between employee expectations of ideal employers and what Singapore companies are perceived to offer.

While having a healthy work-life balance is the second highest consideration for employees, it is the second last in what companies in Singapore are perceived to offer.

The study added that 31 per cent of employees in Singapore think about resigning when they are not fairly recognised or rewarded, or are unable to strike a balance between work and their personal lives.

The study, which was conducted between Dec 7, 2018, and Jan 4, 2019, surveyed 200,000 respondents across 32 markets, with 2,502 respondents coming from Singapore. Out of those surveyed in Singapore, 77 per cent comprised permanent staff, 7 per cent were self-employed or freelancers, while 5 per cent were temporary staff. Others surveyed included students, homemakers, job seekers and those unemployed.