FRANKFURT (REUTERS) - The European Central Bank's decision to buy corporate bonds will be a boon for investors but may have a muted impact on inflation given the small size of that market and its tenuous link to the broader economy.

The ECB, which so far bought bonds issued by governments and other public entities, announced on Thursday (March 10) that it would purchase the debt of private companies provided they are based in the euro zone, have an investment grade rating and are not banks.

ECB President Mario Draghi said the move would ease financing conditions in the real economy, presumably by lowering yields on corporate bonds - effectively making it cheaper for companies to borrow money on the market. 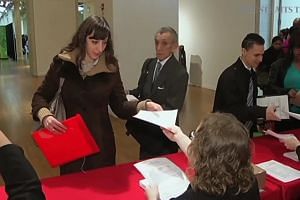 However, the market for such notes is small and is mainly made up of large corporations that have enjoyed low financing costs for years and, in some cases, sit on large cash piles.

The ECB has not said how many bonds it will buy or how large it estimates the market to be.

"Speculation is that it could be in the region of 5 billion euros (S$7.72 billion) per month," Tanguy Le Saout, head of European fixed-income at Pioneer Investments, said.

This would be a small portion of the ECB's monthly purchases, which were increased to 80 billion euros on Thursday.

It may represent a significant slice of the market for such bonds, however.

In a note earlier this year, Barclays analysts said bonds from non-financial institutions that would meet the ECB criteria amounted to 480 billion euros, adding an ECB move into this market would have negligible effect on credit conditions.

What the ECB will achieve is an expansion the assets it can buy, easing fears it may run out of eligible targets.

It will likely also lead investors currently holding corporate bonds into higher-yielding assets such as stocks.

This process, known by central bankers as portfolio-rebalancing, has been the most visible result of central banks' quantitative easing programmes across the world, fuelling rallies in major markets between 2012 and 2015.

It is supposed to finance corporate investment but its impact on the real economy has been small. Many companies have preferred to buy back shares or even sit on their cash, rather than put money to work while growth prospects remain poor.

"Is it enough to boost inflation? I'm not so sure," Philippe Gudin, an economist at Barclays, said. "It's not a silver bullet. Inflation is still low because there are external factors and the recovery is modest."

The ECB's own staff estimates showed price growth would not reach the bank's target of almost 2 per cent for the next two years and economic growth will remain slow.

In the meantime, corporate bond investors may be the real beneficiaries of the ECB's largesse.

"This demand will act as a strong support for current spread levels and should see corporate bonds out-performing their sovereign counter-parts," Pioneer's Le Saout said.