WASHINGTON (AFP) - The coronavirus pandemic has hit like a worldwide hurricane, shutting activity in most economies simultaneously, but some forecasters are more optimistic about the prospects for recovery once the worst has past.

International Monetary Fund chief Kristalina Georgieva has called it the worst crisis since the Great Depression a century ago, and warned the damage could linger.

And yet there are private economists betting on a solid rebound as soon as people can get back to work.

With 1.5 million confirmed cases and 100,000 deaths, the virus has forced economies worldwide to shut down, which in the United States caused 17 million workers to lose their jobs in just three weeks.

Economists at the New York Federal Reserve Bank said the impact is more akin to a natural disaster like a hurricane, rather than a traditional financial or economic crisis.

"The coronavirus pandemic, in contrast, came on suddenly, hitting the economy at full force in one month."

And like a hurricane, it first hit the travel and tourism industry, they said.

But unlike a natural disaster, the authors said the pandemic has not left physical destruction in its wake, "which may well facilitate a quicker economic recovery."

Karen Dynan, a former US Treasury chief economist, is looking at a 20 per cent drop in the American economy in April and May, leading to an 8 per cent contraction for the year.

But Dynan, who helped produce the semi-annual forecast put out by the Peterson Institute for International Economics, is more upbeat about the recovery, projecting a 7.2 per cent US rebound in 2021 year-over-year.

While US officials have expressed hope about a "V-shaped" recovery, with a sharp, rapid return to growth, private economists are more cautious given the uncertainty around the duration and severity of the pandemic.

"We're getting the 'checkmark' not that classic V," Dynan told reporters, referring to the steep decline and gradual recovery.

"We're going to have to proceed slowly, in terms of opening up the economy again. And we're going to have some setbacks," she said, while acknowledging that many of her Peterson colleagues disagree with her more upbeat view. 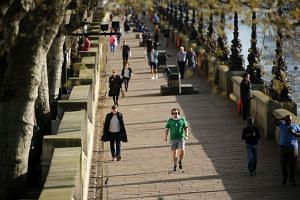 The IMF's Georgieva warned that, even if the pandemic is contained quickly, with most countries seeing incomes decline the global economy likely will see only a "partial recovery" next year, and "it could get worse."

Even with massive government spending in place, "the employment losses will be traumatic, and the rebound post-virus will be U-shaped with a full recovery taking 12 to 18 months," he said.

With the massive infusions of cash to support large companies and small businesses, the US government's finances will take a hit.

But Treasury data for March released Friday do not yet show that impact yet. Outlays are actually lower than the same month of 2019, and receipts slightly higher.

For the fiscal year-to-date, from October to March, outlays and receipts each hit records of US$2.35 trillion (S$3.3 trillion) and US$1.6 trillion, respectively.

But, a Treasury official told reporters, "I can say that we will certainly see a significant impact in the April numbers."

Washington pushed the April 15 tax filing deadline back by three months, and the official says daily tax data from the second half of March have already shown a drop off.