BEIJING (BLOOMBERG) - Earnings reporting season is underway, and analysts are eager to hear from executives about how an escalating trade war between the US and China is impacting their businesses. A common theme is that they are ready to relocate supply chains if the cost of importing Chinese goods becomes prohibitive.

US President Donald Trump imposed a 10 per cent tariff on US$200 billion of Chinese imports in September - following an earlier round of tariffs on US$50 billion of goods - and promised to raise the duty to 25 per cent in January. He's also threatened to expand the levy to all products imported from China - an amount that totalled US$531 billion in the 12 months through August, according to the latest data from the US Department of Commerce.

Here's what companies are telling analysts:

"If there was a broad-based tariff on apparel, I think you could see a bit more of an acceleration of the migration out of China into other regions for apparel sourcing," Mitch Butier, chief executive officer of the California label producer, said during an Oct 23 earnings call. "That will take time. They're just a huge infrastructure within China. That will take some time."

"Especially light manufacturing, factories move very quickly. A number of them have already moved out of China," Jean-Jacques Ruest, CEO of the Canadian railway company said during an Oct 23 earnings call. "They're going to Vietnam. They're going to Bangladesh. They're going to Indonesia. And the product is still being made." 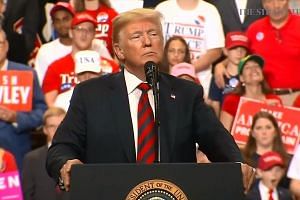 "It's made or being made in other countries, which still basically are there to field the demand of the people who need the products," the executive said. "So overall, we're very bullish about trade from Asia - trans-Pacific trade from Asia to North America in 2019 - but it might be coming from different countries, or different port of origin."

"We certainly are going to continue to evaluate the overall supply chain and look for opportunities to be able to make changes to reduce the impact of tariffs long-term," Mark Borin, chief financial officer of the London-based pollution control equipment maker, said during an Oct 23 earnings call.

"Now, those things take a little bit longer obviously, but we're certainly looking at that," Mr Borin said. "We have a factory in Suzhou, and so we'll evaluate what we do there and how our overall supply chain structure is organised."

"One of the core capabilities of Logitech from a supply chain perspective has always been the ability to move our manufacturing in and out of our own factory," Bracken Darrell, CEO of the Swiss personal computer input device manufacturer, said during an Oct 23 earnings call. "And that includes in and out of other people's factories if we happen to be contract manufacturing with other people in China. And that's exactly what this is about."

"When and if we need to move a product line out - in this case, out of China entirely - we're more than capable of doing that," Darrell said. "We've got the teams to do it, staffing to do it, and we have lots of experience doing it. We do it, in fact, all the time."

"We're pro-actively taking action," Todd Bluedorn, CEO of the Texas-based HVAC company, told analysts during an Oct 22 earnings call. "I'm not sure the Chinese tariffs are going to be short term. And so we're taking action to sort of avoid the tariffs by moving to South-east Asia and other low-cost countries that can meet our requirements."

"We have various levers to pull to mitigate the impact," Frans van Houten, CEO of the Dutch healthcare and lighting technology company, said during an Oct. 22 earnings call. "One is rearranging our supply chain. Of course, that is perhaps the easiest because we have manufacturing facilities in the United States, in Europe, and in Asia: about one third, one third, one third."

"We are already on a path to create so-called multi-modality factories where we can manufacture stuff from other business units. And we were already anticipating that we need to have regional representation in a world that is more polarising," Mr van Houten said. "So, in fact, you could say mentally we were prepared for this. Now, it takes some time to effectuate, bringing some U.S. production into China and vice versa."

"Only 10 per cent of our products are covered. And those items tend to be folding knives, the Westcott ruler business, and some first aid components that go into our first aid kits," Walter Johnsen, CEO of the Connecticut-based maker of cutting, measuring and safety products, said during an Oct 19 earnings call.

"There is a possibility of sourcing in other places for some of those products, but we currently don't have the quality control teams in some of these countries where we might be sourcing," Mr Johnsen said. "If it was a 25 per cent tariff, which is what we're talking about at year-end, if they can implement it on these items, that would probably drive us to put some people to be looking at quality control in some additional countries on a transient basis as we produce."

"The cost going forward may not be inconsequential, given the volume of components currently sourced from China," James Simms, CFO of the Massachusetts manufacturer of power converters, said during an Oct 18 earnings call.

"We are seeking non-Chinese alternate vendors. In addition, we have filed requests with the US government for exclusions from tariffs on a limited number of components, for which no alternative vendor exists."

"We do have capacity to move outside of China. We'll be no different, I believe, than anybody else. We'll look for where the best availability is as for production quality and price around the world," David Weinberg, chief operating officer of the California footwear company, said during an Oct 18 earnings call. "We've been segregating some production of some styles from country to country depending on what the necessities are."

"There's a lot of moving pieces. What happens to the Chinese currency? Does that make up a part of the tariff fees? There's all kinds of moving parts and it's too hard to be out up front," Mr Weinberg said. "I think it's fair to say we are very flexible, we are increasing our production capacity outside of China just in general, so we think we'll be OK."

"With the Chinese tariffs, we are looking at moving. And right now, we're at - roughly 50 per cent of our product comes out of Asia. My goal is to get that closer to 25 per cent or even lower, and the potential for doing that right now is very good," Robert Rucker, CEO of the Minnesota-based retailer of stone tiles, said during an Oct 18 earnings call. "We're not waiting. We're making moves now."

"Many of our customers producing in China concentrate more and more of their production on the local Chinese market" while they set up mirrored production facilities in neighboring countries for exports, Detlef Trefzger, CEO of the Swiss freight company, said during an Oct 18 earnings call. The shift has been going on for almost a decade, he said.

"I would say this trend is accelerating at the moment, but it's also based on the clear five-year plan of the Chinese government" that "concentrates more and more on the local domestic Chinese market," Mr Trefzger said.

"Depending on how the tariff plays out, we have alternative sources already in many places and we may have to find some additional ones," Donald Macpherson, CEO of the Illinois-based distributor of maintenance, repair and operating supplies, said during an Oct 16 earnings call.

"We just look at the total economics, total landing cost and pick the one that's got the best cost for the business. Much of our shifts could come - if it's China, if it's shifted, it could go either to India, to Mexico or to the US, depending on the nature of the product."

"In many cases, we already have alternative sources that are identified. And so what we're referring to is if we have an alternative source, depending on how the maths works with the tariffs, we may be looking to switch that. We may not be if the cost is still better in China post the increase," Mr Macpherson said.