BEIJING (REUTERS) - Profits at China's industrial firms rose sharply in May, maintaining the previous month's sizzling pace despite signs of slowing momentum in the world's second-largest economy and an intensifying trade spat with the United States.

Industrial profits rose 21.1 per cent to 607.1 billion yuan (S$125 billion) in May, according to data published by the National Bureau of Statistics (NBS) on Wednesday (June 27), compared to 21.9 per cent growth in April.

For the first five months, industrial firms notched up profits of 2.73 trillion yuan, an increase of 16.5 per cent from a year earlier, versus a 15 per cent increase in the January-April period.

The earnings jump in May was driven by price gains and lower costs, statistics bureau official He Ping said in a statement accompanying the data.

China's industrial firms have benefited from a hot property and infrastructure construction market over the past two years, which helped stimulate demand for building materials from steel bars to copper pipes, glass and cement.

And while sales have cooled in the face of government restrictions on home purchases, new construction starts rose 20.5 per cent in May and property investment also picked up, suggesting any property slowdown is likely to be relatively modest.

But activity in other parts of the economy including infrastructure investment and industrial output point to softening growth in the world's second largest economy. 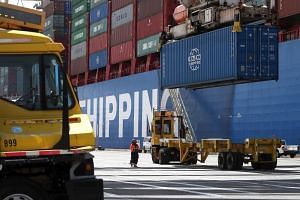 Averting a US-China trade war difficult because of deep differences between the two economies: Trade experts 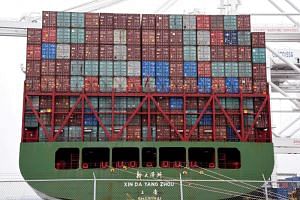 As trade war looms, China wonders whether it's up for the fight

While industrial commodity prices have been strong this year, an intensifying trade dispute between Beijing and Washington has rattled China's commodity markets this month as both sides threatened new import tariffs.

China also continues to battle high pollution levels, with government-ordered suspension of production for steel, cement, coal-fired power plans and petrochemical makers in recent months adding to the challenge for industrial producers ahead.

Beijing is trying to walk a tightrope between supporting economic growth and tamping down financial risks, with policymakers freeing up more funds for lending by cutting required reserve levels for banks twice since April.

Profits at China's state-owned industrial firms rose 28.7 per cent year-on-year in Jan-May period, quickening from a 26.2 per cent increase in the first four months.

Chinese industrial firms' liabilities rose 6.3 per cent on an annual basis as of end-May, according to the stats bureau.