SHANGHAI (REUTERS) - China let the yuan breach the key 7-per-US dollar level on Monday (Aug 5) for the first time in more than a decade, in a sign Beijing might be willing to tolerate more currency weakness that could further inflame a trade conflict with the United States.

The sharp 1.4 per cent drop in the yuan comes days after US President Donald Trump stunned financial markets by vowing to impose 10 per cent tariffs on the remaining US$300 billion of Chinese imports from Sept. 1, abruptly breaking a brief month-long ceasefire in the bruising trade war.

Some analysts said the yuan move could unleash a dangerous new front in the trade hostilities - a currency war.

The People’s Bank of China (PBOC) provided the early impetus for yuan bears by setting a daily rate for the currency at its weakest level in eight months.

Capital Economics Senior China Economist Julian Evans-Pritchard said the PBOC had probably been holding back against allowing a weaker yuan to avoid derailing trade negotiations with the United States.

“The fact that they have now stopped defending 7.00 against the dollar suggests that they have all but abandoned hopes for a trade deal with the US,” he said.

The PBOC gave few clues about its intentions.

In a statement on Monday, the central bank linked the yuan’s weakness to the fallout from the trade war, but said it would not change its currency policy and that two-way fluctuations in the yuan’s value are normal.

“Under the influence of factors including unilateralism, protectionist trade measures, and expectations of tariffs against China, the yuan has depreciated against the dollar today, breaking through 7 yuan per dollar,” the PBOC said.

The central bank set the yuan’s daily midpoint at 6.9225 per dollar before the market open, its weakest level since Dec 3, 2018.

“Today’s fixing was the last line in the sand,” said Ken Cheung, senior Asian FX strategist at Mizuho Bank in Hong Kong. “The PBOC has fully given the green light to yuan depreciation.” 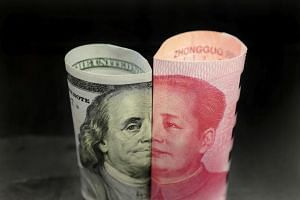 With the escalating trade war giving Beijing fewer reasons to maintain yuan stability, analysts said they expect the currency to continue to weaken.

“In the short-term, the yuan’s strength would be largely determined by the domestic economy. If third-quarter economic growth stabilises, the yuan could stabilise around 7.2 or 7.3 level,” said Zhang Yi, chief economist at Zhonghai Shengrong Capital Management in Beijing.

Monday’s slump past the 7-per-dollar level could further intensify the economic conflict between the United States and China. Trump has long been critical of Beijing for manipulating its currency to gain a trade advantage, and further yuan weakness could draw Washington’s wrath.

Capital Economics’ Evans-Pritchard believes Trump is likely to be angered by the PBOC’s explicit linking of Monday’s yuan weakness to the renewed tariff threat.

Indeed, the flare-up in trade tensions has renewed global financial market concerns over how much China will allow the yuan to weaken to offset heavier pressure on its exporters.

“It appears the Chinese authorities no longer see the need to limit the tools at their disposal and that the currency is now also considered part of the arsenal to be drawn upon,” Rob Carnell, chief economist and head of research, Asia Pacific at ING, said in a note.

Analysts have previously said that authorities will keep depreciation in check due to concerns about potential capital outflows.

Despite slowing economic growth over the past year amid the intensifying trade war, China has not seen a rush of capital flight, thanks to capital controls put in place during the last economic downturn and growing foreign inflows into Chinese stocks and bonds.

In 2015, China stunned global financial markets by devaluing the yuan 2 per cent as its economy slowed. It burned through US$1 trillion in foreign exchange reserves to steady it.

Hong Kong’s Hang Seng index was 2.70 per cent lower in afternoon trade as the city faced major disruptions, with a general strike paralysing parts of the Asian financial centre.

Alex Wang, Hong Kong-based analyst with Ample Finance Group, said worries over Hong Kong’s economy, which slowed more than expected in the second quarter, have been exacerbated by ongoing protests, with sectors including retail and tourism bearing the brunt of the impact.

The benchmark Shanghai Composite Index lost 1.62 per cent lower for its weakest close since Feb. 22, and the blue-chip CSI300 index dropped 1.91 per cent.

Airlines were particularly hard-hit, pulling a transport sub-index down 2.72 per cent.

Highlighting the widening impact of the trade tensions, agricultural commodities’ prices surged after a report that China had asked state-owned firms to halt imports of US agricultural products.

China soymeal futures rose more than 2 per cent and Dalian iron ore futures dropped, hitting their weakest level since July, while London copper slumped to its lowest in over two years.