BEIJING (REUTERS) - Growth in China's manufacturing sector unexpectedly picked up in August after a two-month slide, offering some cushion for the slowing economy as the United States rapidly ratchets up tariffs on Chinese goods.

The respite may prove brief, however. Export orders shrank for a third straight month, a business survey showed, suggesting a flurry of punitive US trade actions is starting to bite even as Washington readies more sweeping measures.

The official Purchasing Managers' Index (PMI) released on Friday (Aug 31) rose to 51.3 in August, from 51.2 in July, remaining above the 50-point mark that separates growth from contraction for a 25th straight month.

Analysts surveyed by Reuters had forecast it would dip slightly for a third straight month to 51.0.

Despite the better-than-expected headline reading, some analysts maintain economic conditions in China are likely to get worse before they get better.

Both domestic and external demand are still slowing, and it will take some time for higher government infrastructure spending, lower borrowing costs and easier credit to start filtering through to the broader economy.

Nomura expects August activity data, due in coming weeks, to be generally weaker, while Capital Economics is awaiting the findings of a private factory survey on Monday, warning the official readings have sent false signals in the past.

Statistics bureau official Zhao Qinghe, in a statement accompanying the data, said the PMI shows China's manufacturing sector is continuing to expand at a steady pace.

But he acknowledged international trade frictions and other external uncertainties are hurting exports and imports.

New export orders, an indicator of future activity, contracted for a third straight month. The sub-index slipped to 49.4, the lowest since February, from 49.8 in July.

The import sub-index, a gauge of domestic demand, fell to 49.1, the lowest in at least a year and down from 49.6 in July.

Weighed down by a regulatory crackdown on riskier lending, China's economy was already starting to cool even before the trade dispute with Washington flared, with investment growth receding to a record low.

That has prompted Beijing to shift its priorities to supporting growth while it tries to weather the trade storm.

Authorities are speeding up construction approvals, pumping more cash into the financial system to reduce financing costs and urging banks to lend more to struggling firms.

But after years of trying to reduce financial risks, officials appear wary of greatly adding to a mountain of debt fuelled by past stimulus binges.

Still, any hint of a sharper economic slowdown could raise questions over whether Beijing may resort to more forceful measures to meet its full-year growth target of around 6.5 percent, as top officials have repeatedly pledged to do.

For China's manufacturers, the trade war is getting uglier by the day.

President Donald Trump has told aides he is ready to impose tariffs on US$200 billion more in Chinese imports as soon as a public comment period on the plan ends next week, Bloomberg News reported on Thursday. 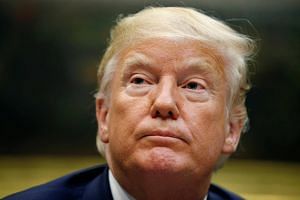 Markets had expected the implementation in late September, which in theory would have given some for further negotiations between Washington and Beijing. The two sides ended talks last week with no major breakthrough and triggered another round of duelling tariffs on each other's goods.

To be sure, China's export data has appeared largely resilient so far. But analysts suspect that may be due to companies rushing out shipments before further tariffs kick in, raising the risk of a sharp drop-off in coming months.

Exports may only grow 2 percent in yuan terms in the second half, the State Information Center under the National Development and Reform Commission predicted. That compares with a 4.9 percent rise in first half.

Still, some Chinese exporters may be successfully dodging the blow of U.S. duties by diversifying their markets.

The country's biggest listed steel producer, Baoshan Iron & Steel Co Ltd, expects to reduce shipments to the U.S. in the second half but will keep total exports stable, a company executive said on Tuesday.

The PMI survey showed manufacturers were a bit busier overall in August, with an output sub-index rising to 53.3 in August from 53.0 in July. Total new orders grew at only a marginally softer pace.

But more firms reported that higher costs and fluctuations in the yuan currency were impacting production, Zhao said.

Gauges of both upstream and downstream inflation in the manufacturing industry rose sharply in August, the PMI data showed, which if sustained could complicate China's efforts to boost lending and rejuvenate domestic growth.

A sister survey on China's services sector was similarly mixed, with overall activity ticking up but new orders and construction weakening. The official non-manufacturing Purchasing Managers' Index (PMI) rose to 54.2 from 54.0.

Chinese policymakers are counting on growth in services and consumption to rebalance their economic growth model from its heavy reliance on investment and exports.

But retail sales unexpectedly moderated in July despite a broad import tax cut last month, indicating consumers are turning more cautious, while disposable income is rising at a slower pace.