SINGAPORE (REUTERS) - Singapore's central bank is increasingly likely to ease monetary policy at its semi-annual meeting in October in a bid to boost an export-reliant economy being choked by the US-China trade war, economists said on Friday (July 12).

Earlier on Friday, preliminary data showed Singapore had annual growth of just 0.1 per cent in the second quarter, its slowest expansion in a decade and well below expectations - increasing the chances the Monetary Authority of Singapore (MAS) will act.

Seven of 11 economists polled by Reuters said they expect the MAS to loosen policy in October, with the other four forecasting no change.

One of the seven seeing looser policy ING, said in a note on Friday that a move by MAS might be "imminent".

MAS said last month it was not considering changing monetary policy before its October meeting.

Steve Cochrane, economist at Moody's Analytics, said: "The US-China trade war is continuing to have deep and long-lasting effects on the region."

"Given the severity of this quarterly outcome, there is pressure for the MAS to ease monetary policy in October," he said.

There is the growing prospect Singapore could slip into recession later this year with its core manufacturing sector being particularly badly affected by US-China tensions. 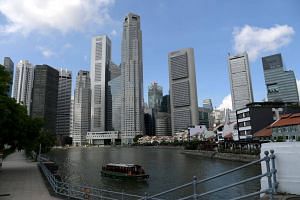 S'pore's economy grows just 0.1% in Q2, lowest in decade and worse than expected

Core inflation, another key consideration for the MAS, is at the lower end of its target band.

"We have got a very challenging external backdrop," said Sian Fenner at Oxford Economics.

"With inflation still unlikely to be a barrier, we don't see any reason why they (MAS) wouldn't make some move to ease policy."

The central bank manages monetary policy through exchange rate settings rather than interest rates, letting the Singapore dollar rise or fall against the currencies of its main trading partners within an undisclosed policy band.

The MAS can use several tools to change policy but most commonly it will adjust the so-called slope of this band, which determines the pace at which the currency can move.