SINGAPORE - While Singapore has signed several free trade agreements (FTAs) over the years, one group of businesses seems to be having difficulties reaping the benefits of them - small and medium-sized enterprises (SMEs).

To help them, companies could "hunt in a pack", with larger businesses such as multinationals given incentives to work with smaller firms from non-competing industries, leading the way to enter new markets, industry leaders said in a pre-budget meeting on Wednesday (Jan 9).

"A lot of the FTAs and high-level government-to-government contracts that get signed seldom filter down to the SME level, and they normally stay at maybe the government-linked company level," said Mr Ang Yuit, vice-president of membership and training at the Association of Small and Medium Enterprises.

"More can be done by having some of the larger enterprises take the leadership in doing the hunting as a pack."

Mr Ang was one of 15 panellists who spoke at the Institute of Singapore Chartered Accountants event on the Republic's future economic progress.

Besides mooting ways to support SMEs, industry leaders at the InterContinental Singapore hotel shared their concerns about the fallout from trade tensions between the United States and China, discussed the need for internationalisation and spoke on the challenges in understanding the Industry Transformation Maps (ITMs), which are meant to help different sectors prepare for the future.

Their discussion came ahead of the Feb 18 Budget and was co-chaired by Mr Liang Eng Hwa, chairman of the Government Parliamentary Committee for Finance and Trade and Industry, and Mr Kon Yin Tong, president of the Institute of Singapore Chartered Accountants. 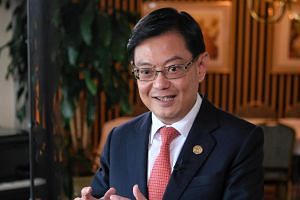 Singapore must continue to transform economy, says Heng Swee Keat, as he calls for Budget suggestions

Mr Liang said his committee is set to meet government officials later this month, and businesses' feedback will be conveyed to them, noting the need for industry stakeholders to take ownership of transformation efforts for better outcomes.

While he highlighted the role that trade associations and chambers play in bringing companies, especially SMEs, on board with ITMs, association leaders said the groups and their members face constraints.

In particular, the challenges faced by smaller companies were a recurring topic at Wednesday's event..

Dr Ahmad Magad, secretary-general of the Singapore Manufacturing Federation, said ITMs need to be made clearer and more detailed for SMEs to understand them better, adding that these firms lack information about how they can benefit from FTAs.

Asked by Mr Kon why smaller businesses are not already "hunting in packs", he said that apart from being guarded about their activities, SMEs may also be unable to spare manpower to manage such collaborations.

Mr Tay Hong Beng, head of tax at KPMG Singapore, suggested companies could focus on working with "complementary partners" to innovate, rather than be asked to work with their competitors.

To boost entrepreneurship, the authorities can consider allowing companies to carry back tax losses for more than a year, said Mr Low Hwee Chua, regional managing partner for tax at Deloitte Singapore.

He added that with SMEs having "stretched resources" to retrain workers in a changing environment, cash payouts or tax deductions to defray training costs could be helpful as well - on top of existing SkillsFuture credits.

Grants for training of workers should apply to more online courses too, said Mr Ang, who noted that "not many schemes support online training".

He added that SMEs will need a mindset change for more of them to go regional, given that they tend to be Singapore-centred instead of designing their businesses to be large from the onset.

"If we can have a process for our members to employ foreign talent in specific tech or deep tech areas where we have shortages such as artificial intelligence or blockchain, that would be very useful," he said, adding it is also tough to get workers trained in these new areas through government programmes.

Meanwhile, Mr R. Dhinakaran, president of the Singapore Retailers Association, suggested allowing certain sectors to have seasonal quotas for foreign workers during the periods of a year when demand for manpower is higher.

This will help ease the labour crunch without compromising too much on Singapore's foreign manpower policy, he noted.

OCBC bank's head of treasury research and strategy, Ms Selena Ling, said there is "room for a more fiscally generous budget", noting that this year's Budget will also see the continuation of existing schemes, such as the ITMs.

"The external environment remains fairly murky. The US-China trade war is still there, we don't know what (US President Donald Trump or Chinese President Xi Jinping) will decide," she said. "Will we get geopolitical uncertainties... I think that's a given. It's a question of how lasting the impact will be. So far, they don't seem to have caused permanent damage."