LONDON (REUTERS) - Britain still faces an "alarmingly high" risk of a no-deal Brexit, which could happen suddenly and by accident without politicians fully intending it, Bank of England Governor Mark Carney warned on Wednesday (April 3).

The idea, promoted by some Brexit supporters, that Britain could effectively trade on World Trade Organisation terms with zero tariffs after a no-deal Brexit was "absolute nonsense", Carney added in the interview with broadcaster Sky News.

Carney said that as long ago as August last year, he had described the chance of Britain leaving the European Union without any transition deal as uncomfortably high.

"It's alarmingly high now," he said.

British Prime Minister Theresa May said late on Tuesday that she intended to seek a further delay to Brexit, after announcing that she would start talks with Labour Party leader Jeremy Corbyn to get cross-party support for an exit deal.

But unless EU leaders agree unanimously at a meeting next week, Britain will automatically leave the bloc on April 12. 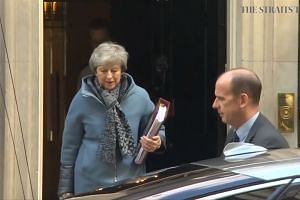 "So, no-deal would happen by accident, it would happen suddenly, there would be no transition - it is an accidental disorderly Brexit."

Carney told parliament last month that a disorderly Brexit could reduce British economic output by around 5 per cent - almost as much as it fell after the 2008 financial crisis.

On Wednesday, he reiterated that Britain's financial sector was well-prepared for a disorderly Brexit, but that other parts of the economy, especially exporters, would suffer.

Carney is due to step down from the BoE at the end of January 2020, having extended his term to cover Britain's departure from the EU.

Asked if he would consider a further extension, he said: "Absolutely no."