SINGAPORE - The Australian dollar on Monday morning weakened below parity against the Singapore dollar for the first time since it last closed below that level in March 2009 during the global financial crisis.

The once-mighty Aussie dollar has been battered by slowing global demand for the country's commodities exports and a string of disappointing economic data in recent months.

The falling Australian dolllar could see lower prices for Singapore's imports from Down Under, although other factors like weather conditions affecting supply, labour costs and demand could hold back or limit declines.

Susie Oh, director of Oh Deli, a local importer of Australian food products, told The Straits Times: "The Australian dollar has been overvalued for a long time because of the resources boom, so this should bring us some stability in our prices."

"It's going to bring our costs down potentially, but there's always a chance the Aussies will put their price up," she added. 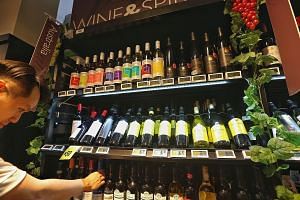 Why prices are sticky despite the falling Aussie dollar

A slowdown in China has been a major contributor to the Australian dollar's weakness. Australia's mining and agricultural sectors make up a significant share of the country's economy, with the products to be exported mainly to the East Asian market.

The Aussie dollar on Friday slumped to its weakest level in six years against the US dollar as a gauge of Chinese manufacturing unexpectedly fell to the lowest in 15 months the most accurate forecaster of the currency cut its forecasts.

Economists say the outlook for the Australian economy remains cloudy, particularly as the commodities boom that fuelled the country's growth in the decade to 2013 is now over.

Rating agency Standard & Poor's said it may lower Australia's credit rating if the country's budget does not improve.

Correction: An earlier version of the story said the Australian dollar last fell below parity with the Singapore dollar in 2002. It was actually 2009. We are sorry for the error.