LONDON (AFP) - World stocks surged on Thursday and the pound hit 2016 highs as markets seemed geared up for a win by the "Remain" camp in Britain's historic referendum on EU membership.

Even as polls suggest a close outcome after a hotly contested campaign, traders appear confident that Britons will decide against pulling out of the 28-nation bloc.

"Sterling strengthened further against the dollar on Thursday, as bookmakers' odds on a Brexit continued to lengthen in the wake of the publication of the last few opinion polls," John Higgins, of Capital Economics, said in a note to clients.

Financial markets have largely tracked polls in the countdown to the vote - the latest, an Ipsos MORI survey for the London Evening Standard newspaper, put "Remain" on 52 per cent and "Leave" on 48 per cent.

London's benchmark FTSE 100 closed more than one percent higher, while euro zone indices in Frankfurt and Paris forged even higher, at around two percent up. Milan won 3.7 per cent. 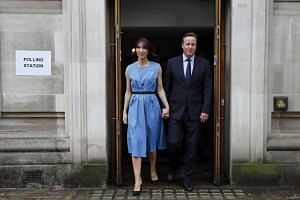 But Oanda's Craig Erlam said he would "possibly have expected" investors to be "a little more conservative" since the result was "far from guaranteed" and given a large number of undecided voters.

He warned of "quite severe" consequences in the market if voters opted to leave the EU.

Moneycorp traders also pointed to risks for sterling in the event of a British exit.

If that happened, they said, "Black Friday" would make the 1992 currency crisis that became known as Black Wednesday "look like a Sunday school picnic".

Large US banks, JPMorgan Chase, Bank of America and Citigroup all rose about 2 per cent or more.

London is the European headquarters for the banks and a vote for an EU pullout could force them to make costly changes to their operations.

In other US economic news, US new-home sales fell in May following a surge in April but still remained solidly higher than last year in a growing housing market.

However, with sentiment shifting to a "Remain" victory, equities have rebounded strongly this week.

"Anybody who is predicting this (outcome) with a high degree of certainty is delusional," said Bill Fitzpatrick, portfolio manager at Manulife Asset Management. 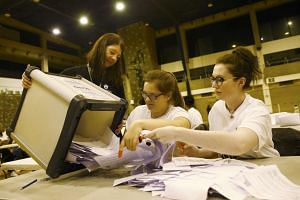 The picture was more mixed in Asia, where Tokyo ended up 1.1 per cent and Hong Kong rose 0.4 per cent, while Shanghai closed down 0.5 per cent down and Seoul shed 0.3 per cent.

"Markets seem to have almost entirely priced in a 'Remain' vote win, meaning that the market moves and volatility around the vote may be far less than many had expected," Angus Nicholson, a Melbourne-based market analyst at IG, said in a commentary.

"Nonetheless, markets are still incredibly nervous and some sharp market moves are likely over the next 24 hours."

Financial institutions are reinforcing their trading teams to cope with the prospect of frantic trading through the day and the world's leading central banks say they are ready to react to any eventuality.

Britain, which is the world's fifth largest economy, will suffer a powerful blow to growth and jobs, corporate chiefs warned, if the country becomes the first state to defect from the EU in the bloc's 60-year history.