The 36-year-old brothers lost their case against Zuckerberg but received a settlement of US$65 million and used US$11 million of it to invest in bitcoin back in 2013, meaning they were early backers of the cryptocurrency.

The identical twins - who were made famous in the Facebook movie, The Social Network - reportedly bought 1 per cent of all bitcoin in circulation at that time.

Their bet paid off hugely with bitcoin having soared over 10,000 per cent after last week's price surge.

That stratospheric rise has made millionaires out of many of bitcoin's early backers but the Winklevoss twins are believed to be the first public figures to have turned an investment into more than US$1 billion, the Daily Telegraph reported on Sunday.

"We see bitcoin as potentially the greatest social network of all," Tyler told the Financial Times in 2016. The twins first learned of bitcoin while on holiday in Ibiza in 2012, and launched their own digital currency exchange, called Gemini, in 2015.

On Monday, bitcoin hovered close to an all-time high of US$11,800 set on Sunday after the US derivatives regulator allowed CME Group and CBOE Global Markets to list bitcoin futures. 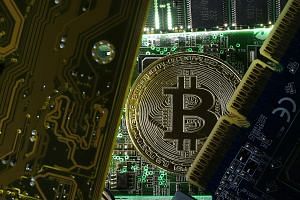 Bitcoin 'could be threat to financial stability'

Root for the tech behind bitcoin

CME Group's contracts will debut on Dec 18 while Cboe has yet to announce a start date. Both got the green light on Friday after going through a process called self-certification - a pledge to the US Commodity Futures Trading Commission that the products don't run afoul of the law, Bloomberg reported.

Bitcoin's heady and wild ride has prompted multiple warnings of a bubble.

No one know who the secretive inventor of bitcoin - known as Satoshi Nakamoto - really is.

Not backed by any central bank or real asset, bitcoin is both created and held electronically. Its recent success can be in part attributed to Asia, with Japan recently legalising it as an official method of payment.

An increasing number of other countries are now getting regulators to look at bitcoin and investing in blockchain, which legitimises the cryptocurrency.