SAN FRANCISCO (BLOOMBERG) - WeWork will narrowly avoid financial ruin and, in the process, reward its former leader, Adam Neumann, with as much as US$1.2 billion (S$1.6 billion). The reaction from his former colleagues, who are still facing the prospect of mass job cuts and a corporate crisis: "You've got to be kidding me."

That was one of the comments posted on WeWork's staff-wide communications system on Tuesday (Oct 22), reflecting a broader mood throughout its headquarters in New York.

Dozens of employees expressed indignation in interviews and messages to colleagues on company Slack channels that were relayed to Bloomberg. They requested anonymity in a bid to protect their jobs, as management weighs the dismissal of thousands of employees.

WeWork's board agreed on Tuesday to take a bailout from SoftBank Group, which will receive a majority stake.

In the deal, which has yet to be formally announced, the Japanese conglomerate will provide US$6.5 billion to the business, as it is on the verge of running out of money. SoftBank will also buy as much as US$3 billion in stock from shareholders at the lowest price since 2015.

Almost a third of that offer may be allocated to Mr Neumann, in addition to a consulting fee of about US$185 million, a US$500 million credit line and the ability to appoint two board members. In exchange, Mr Neumann will step down from his role as chairman.

Most employees who sell their shares to SoftBank will do so for less than the paper value of their stakes when they were issued. Mr Mike Adams, who sold a start-up to WeWork, described the payout to Mr Neumann as an "injustice".

Representatives for Mr Neumann and WeWork declined to comment. A spokesman for SoftBank did not immediately respond to a request for comment.

Mr Neumann, 40, built WeWork into a global real estate company fuelled by relentless optimism and billions of dollars in investment capital and debt. His sermons about community and mission engendered fierce loyalty among staff and investors for years.

But his aura vanished over the last couple months when public investors were given a closer look at the business ahead of an initial public offering. WeWork's parent company, We Co, abandoned the IPO, and SoftBank helped oust Mr Neumann as chief executive officer. 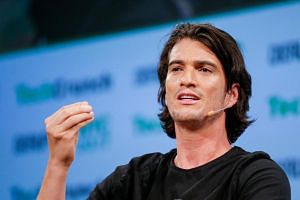 Adam Neumann's era of excess and eccentricity is over at WeWork

In recent weeks, an executive exodus and cost-saving measures dampened morale. Especially in satellite offices, many workers had stopped coming into work. News of Mr Neumann's "platinum parachute", as one former employee described it, made things a lot worse this week.

A link to a news article about the deal on WeWork's Slack network on Tuesday drew more than 100 "thumbs down" emoji from employees. Several workers noted the irony that WeWork could not afford payroll costs associated with the planned job cuts but that its largest shareholder, Mr Masayoshi Son's SoftBank, agreed to pay a hefty fee to Mr Neumann.

One post read: "So we're too broke to pay employees severance, but Adam gets US$200m?"

SoftBank offers $13.6b to take control of WeWork; bailout will see exit of founder Adam Neumann

Another employee posted a photo of the orphan from Oliver Twist with the caption: "Please, Masayoshi Son, can I have some severance?"

Mr Neumann was the main subject of ire from staff, but some complaints were also pointed at the pair of men who replaced him as CEO last month: "Seriously, where's the e-mail from our co-CEOs or whoever's running the company now?"