NEW YORK (AFP) - Wall Street closed marginally lower on Tuesday (Aug 30) as US officials reacted angrily to the European authorities' decision to demand US$14.5 billion (S$19.8 billion) in back taxes from Apple.

The tech giant's shares fell 0.8 per cent on the Nasdaq, putting the company down 3.2 per cent over the last two weeks. 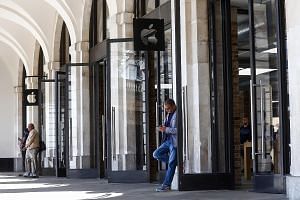 Other tech companies were likewise in negative territory: Microsoft and HP fell 0.4 per cent while Google parent Alphabet was down 0.5 per cent.

Financial sector giants bucked the downward trend however. The investment giant Goldman Sachs rose 1.9 per cent, JPMorgan Chase was up 0.8 per cent and Bank of America gained 2.2 per cent. Morgan Stanley was up 2.5 per cent.

Abercrombie & Fitch suffered a 20 per cent drop in share price, while other clothing retailers had smaller declines: Gap fell 4.3 per cent, Urban Outfitters lost 2.5 per cent and Guess was down 4.4 per cent.

US oil companies were mixed as crude prices continued to slip, with Chevron and Exxon Mobil both falling 0.4 per cent but Marathon Petroleum rising 0.9 per cent. ConocoPhillips lost 0.3 per cent.